Ohio race: Another candidate jumps into the most competitive GOP Senate primary in the country

In a national announcement shared first with Fox News, Moreno declared, “I’m running to represent the people of Ohio in the United States Senate to protect the American dream for the next generation.”

FIELD OF GOP CONTENDERS FOR THE SENATE IN OHIO KEEPS GROWING

“If we’re going to protect this country from the socialist left and keep this precious idea built on the concept of freedom, then we need outsiders who back up their words with action. I won’t take money from corporate PACs,” Moreno said in a campaign video.

The candidate also pledged to “strongly support term limits for DC politicians. I’ll crack down on China and get our great private companies to build a supply chain made right here in America.”

In his video, Moreno spotlights how at age 5 he left his native Columbia and boarded a plane with her mother and siblings bound for America.

“My parents came here legally because they wanted us to see in America we could accomplish anything,” he noted.

“I came from a country surrounded by the ideology of radicals like Fidel Castro and Che Guevara, who promised to give everyone all they needed and solve all their problems — just like Bernie Sanders and AOC are doing today,” he charged as he took aim two of the best-known progressive leaders in Congress.

Moreno vowed that “no one will fight harder against the cancel culture of the socialist left.” 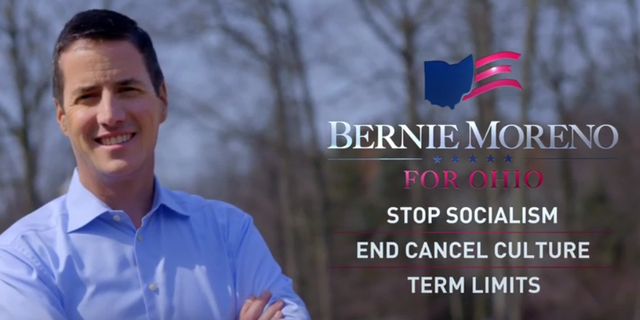 Touting his outsider credentials in a race with a growing number of political veterans, he stressed: “If we’re going to protect this country from the socialist left, and keep this precious idea built on the concept of freedom, then we need outsiders who back up their words with action.”

Moreno highlighted in his video how he “started as an intern” at General Motors and made his way “to the top of the automotive industry.”

Moreno grew his business from a single dealership into an large collection of luxury dealerships across several states, and last decade became the largest volume luxury dealer in the Midwest. He’s also branched out his Bernie Moreno companies into non-automotive acquisitions.

But Moreno’s not the only Republican contender who can dip into deep pockets to help finance their campaign. Gibbons has said if he declares his candidacy, he’ll make an initial $5 million investment to back his bid. Last month, PayPal co-founder and billionaire venture capitalist Peter Thiel contributed $10 million of his own money into a super PAC that would support Vance if he runs. And Mandel started his 2020 bid with $4.5 million cash on hand, left over from his past campaigns.

In the race for the Democratic nomination, longtime Democratic Rep. Tim Ryan of northeast Ohio is likely to launch a campaign, with a handful of other Democrats considered potential contenders.

The U.S. Senate is currently split 50-50 between the two parties, but the Democrats hold a razor-thin majority, due to the tie-breaking vote of Vice President Kamala Harris, who serves as president of the Senate. That means the GOP only needs a one-seat pickup to regain the majority.

But Republicans are defending 20 of the 34 seats up for grabs in 2022. Besides Ohio, the GOP is also defending open seats in the key battlegrounds of North Carolina and Pennsylvania, as well as in Missouri and Alabama.