There’s a hairy situation brewing at the executive. 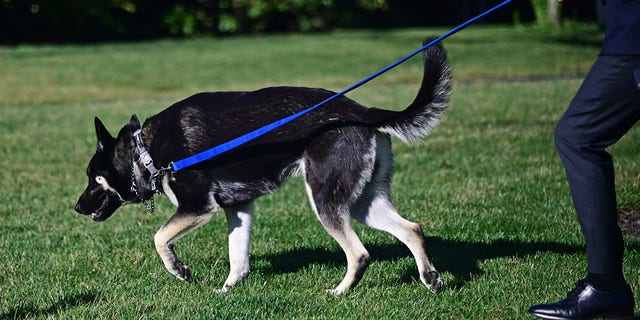 An aide walks the Bidens’ dog Major on the South Lawn of the White House in Washington, D.C., on March 29, 2021. (Getty Images)

Krohn added that behavior comes out of fear and insecurities, which he says is typical in the German shepherd breed — like Major, “especially when it’s not a well-bred dog.”

“And you can’t punish that out of a dog … you can’t treat that out of a dog,” he said, according to Politico. “You have to change the mindset of the dog to where they feel comfortable and confident in their own skin and they trust the people around them.”

The series of biting incidents started in March when Major, 3, sank his teeth into a Secret Service employee, who required attention from the White House medical unit. White House press secretary Jen Psaki referred to that incident as “minor.”

After the first bite occurred, Major and Biden’s seemingly less rambunctious, older German Shepherd, Champ, 13, were sent to Wilmington, Delaware, to be looked after by a family friend. They later returned to the White House, reports said.

During an interview with “Good Morning America,” Biden said Major was going home and he “didn’t banish him to home.”

“We have a dogsitter there — a friend who takes him. And — but you turn a corner and there’s — there’s two people I don’t know at all. And, you know, and they move — and he moves to protect. But he is — he’s a sweet dog,” Biden said. “85 percent of the people there love him. He just — all he does is lick them and wag his tail.”

But late last month, Major bit an employee on the White House South Lawn, who then required medical attention.

First lady Jill Biden’s press secretary Michael de Rosa confirmed the “nip” in a statement to Fox News. “Major is still adjusting to his new surroundings and he nipped someone while on a walk. Out of an abundance of caution, the individual was seen by WHMU [White House medical unit] and then returned to work without injury.”

Celebrity animal trainer Joel Silverman referenced Biden’s “Good Morning America” interview and suggested that “nobody is looking at this thing from the very beginning as a serious thing.”

“When the dog bites one time, it’s something people need to take a look at,” Silverman told Politico. “When you have the owner — I don’t care if you’re the president of the United States or you’re just an average dog trainer like myself — if you are answering a question and blowing off an issue about the biting, that’s a problem. That’s a red flag.”

“Ask not what the dog can do for you. Ask what you can do for the dog,” Millan added.

Previous FLASHBACK: Voter ID issues prompted Colorado to disqualify more than 21,000 ballots in 2016
Next Woman shares how she saved enough during pandemic to buy a house: 'I'm in shock'