elections hoping to flip us-regions 6th Congressional District in a runoff election will not even have a candidate to vote for after only Republicans advanced to the runoff this weekend.

The GOP received more than 60% of votes in the special election, while Democrats received less than 40%.

“Yes, Dem turnout in #TX06 is pretty bad. But, it also speaks to the fact that no high-profile Dems really rallied around their top candidates,” Cook Political Report editor Dave Wasserman wrote on Twitter, even though failed Texas gubernatorial candidate Beto O’Rourke tried to rally voters in April.

“The [Democratic Congressional Campaign Committee] will get some flak for sleeping on #TX06, leading to this poor showing. But strategically, they were right not to throw away millions: TX [Republicans] will get to redraw it before 2022, so it doesn’t matter for the majority,” Wasserman continued. 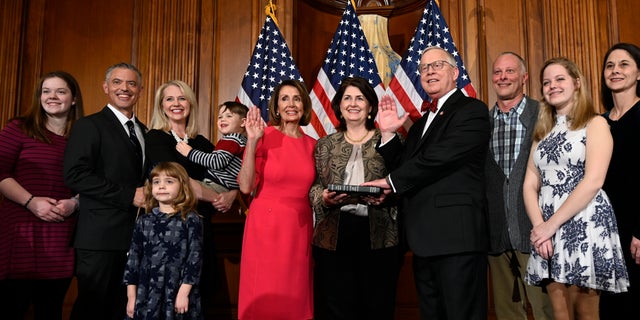 In this Jan. 3, 2019 file photo, House Speaker Nancy Pelosi of Calif., poses during a ceremonial swearing-in with Rep. Ron Wright, R-Texas, fourth from right, on Capitol Hill in Washington during the opening session of the 116th Congress. (AP Photo/Susan Walsh, File)

Republicans Susan Wright, the wife of the late Republican Rep. Ron Wright, and Jake Ellzey advanced to the runoff, which many see as a bellwether for future contests.

Ellzey defeated Democrat Jana Lynne Sanchez by less than 400 votes for the second runoff spot. The New York Times reported that the special election results disappointed Democrats who hoped for a better showing for Sanchez.

“Democrats have come a long way toward competing in Texas but we still have a way to go,” Sanchez said in a statement on Sunday. “Unfortunately, tonight we came up short, and two Republicans will be competing to represent this congressional district.

WIDOW OF LATE CONGRESSMAN FROM TEXAS SEEKING HIS FORMER SEAT

“Congratulations to Susan Wright on her great surge yesterday which made her NUMBER ONE and assures her participation in the TX-06 runoff against another Republican,” Trump said in a statement. “The Democrats have just conceded the race. Susan surged after I gave her an endorsement last week. Her wonderful husband is looking down, and is very proud of her!”

Wright is the widow of the late Rep. Ron Wright, R-us-regions, who died earlier in February after contracting coronavirus. Wright, who had battled cancer for years, announced Jan. 21 that he was experiencing “minor” COVID-19 symptoms. He was admitted to Baylor Hospital in Dallas and died on Feb. 7. 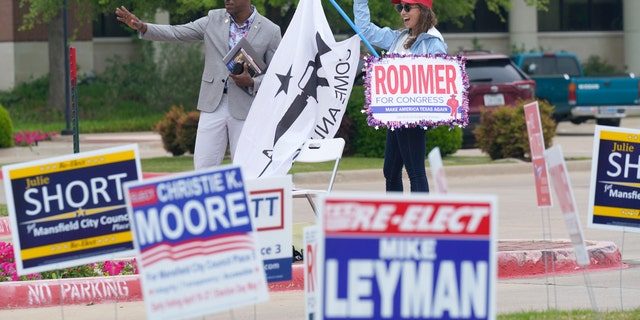 Republicans were quick to cast Democrats’ failure in Texas as a referendum on the party’s national agenda.

“Democrats’ socialist agenda that has opened our borders, destroyed thousands of energy jobs and wants to raise middle-class taxes by trillions of dollars eliminated any chance of them being competitive in this district. I look forward to welcoming a new Republican colleague to Congress,” National Republican Congressional Committee Chairman Tom Emmer told Fox News in a statement.

“This sure looks like an enthusiasm gap to me. Maybe the American _______ Plan isn’t just a political winner after all,” Ruffini wrote on Twitter on Sunday, referencing President Biden’s plethora of plans.

Fox News’ inquiry to the DCCC was not returned at the time of publication.