star-wars” target=”_blank”>”Star Wars”< went viral for capturing her appearing as though she summoned the sea creature out of the Atlantic Ocean on a fishing boat in Maine. 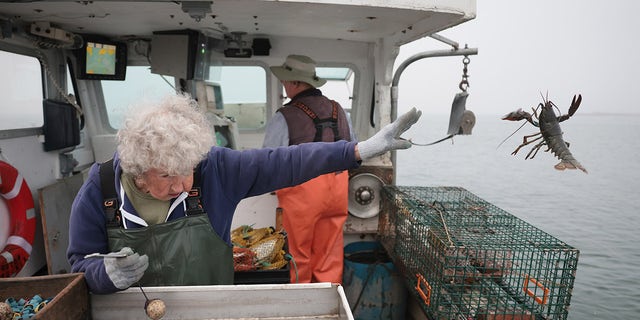 Rockland-based Virginia Oliver has been lobstering since she was 8, before the Great Depression, the Boston Globe reported. The photo of her caught in the act of catching the crustacean has gotten the attention of “Star Wars” fans on social media with hundreds of comments and retweets of memes fans have created.

Actor Mark Hamill, known for his portrayal of Luke Skywalker in the original “Star Wars” trilogy, led the charge in captioning the image tweeting “The Force is strong with this lobsterwoman.”

So it didn’t take long for “Star Wars” fans to get in on the fun – superimposing lightsabers onto the image. User Liam Kent posted a photo on Twitter showing an edit of Oliver and a lobster holding lightsabers.

“Never make a lobsterwoman use the force,” he captioned the photo.

Another tweeted: “What if we’re all misreading this photo and the lobsterwoman is so powerful that she’s actually summoning a lobster out of the ocean and into a boat.”

Oliver, a mother of four, told News Center Maine she typically wakes up at 4:45 a.m. and drives down to her late husband’s old boat off of Rockland, three days a week. She drops 200 pots into the ocean with a little help from her son, Max, while she bands the lobsters and fills bait bags with poggies, News Center Maine reported.

Oliver says she enjoys the independence of going out on her boat to lobster and says some of her catch usually ends up in her kitchen where she preps a classic Maine lobster roll grilled on a bun with a little mayo.

And the centenarian isn’t losing steam anytime soon – she says she has no plans to retire from lobstering. When asked when she plans to give up her post she told News Center Maine, “When I die.”