Ohio 4-year-old gets new heart for his birthday: 'Eternally grateful'

A 4-year-old who asked for a new heart has received his birthday wish early.

Sammy Jones, of us-regions, was born with healthy-living, meaning the left side of his heart was not functioning.

Although he underwent three surgeries over the last four years to remedy the issue, complications arose last year. As a result, he was placed on a heart transplant list in December.

On April 4, nearly three weeks before his fourth birthday, the boy underwent a 14-hour lifesaving heart transplant surgery at Cincinnati Children’s Hospital Medical Center, which was a success.

“It was crazy. After you do this for a long period of time … it just doesn’t seem like there’s any end in sight,” Sammy’s parenting”>dad<

Jones said the doctors at Cincinnati Children’s were confident in the effectiveness of a series of surgeries that would make living with hypoplastic left heart syndrome possible for Sammy.

Jones said he and Sink were surprised by the difference in reaction and were excited about the positivity.

Dr. David Morales, the director of Cincinnati Children’s Hospital’s Heart Institute, told Fox News Digital that hypoplastic left heart syndrome is often treated with a series of three surgeries — called the Norwood, Glenn and Fontan procedures — which help the heart function while bypassing the left side.

About 1,025 babies born in the U.S. have hypoplastic left heart syndrome, according to the U.S. Centers for Disease Control and Prevention (CDC). 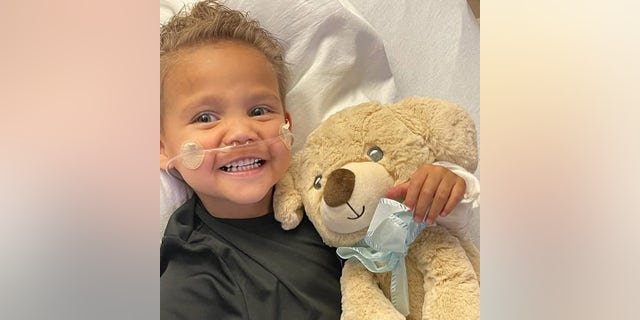 Morales said Sammy’s condition is even more unique because along with hypoplastic left heart syndrome, Sammy’s aortic and mitral valves were both “severely leaking.”

“He’s been through it, but that’s why we call him Superman Sammy.”

Morales added that doctors were able to do an additional — and relatively newly developed — procedure, called an LV exclusion, which excluded Sammy’s left ventricle during Sammy’s first open-heart surgery after he was born.

“There are many patients who do very well,” Morales explained. “They can live a full life.”

“Maybe more than likely they’re going to need a transplant. But who knows?” Morales added. “Our technology, artificial hearts, continue to get better and better.”

‘Fighting for his life’

On April 23, 2018, Sammy was born at Cincinnati Children’s Hospital. Immediately, the child underwent a 12-hour open heart surgery and stayed at the hospital for the first seven or eight months of his life, Jones said.

In July 2020, Sammy underwent his second procedure and in February 2021, he had his third surgery.

“The prognosis at that time was that he would be fine,” Jones said. 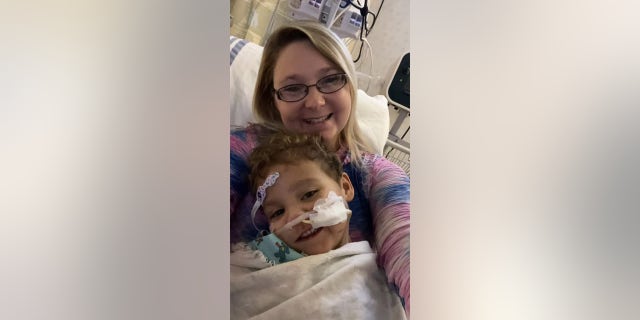 Jones and his partner Kortney Sink found out about Sammy’s condition when Sink was about four months pregnant, Jones told Fox News Digital. They were learning the sex of the baby when doctors saw on the ultrasound that Sammy had hypoplastic left heart syndrome, Jones said. Sammy is pictured with his mom, Kortney Sink.
(Garland Jones)

And Sammy seemed to be doing well, Jones said.

Sammy loves football — he even became famous earlier this year for his love of the NFL’s Cincinnati Bengals, according to WKRC — and adores his 6-year-old sister. Jones said the two are “attached at the hip.”

By the time fall rolled around, things took a turn for the worse.

Jones said Sammy got RSV (respiratory syncytial virus) — which is an infection of the lungs and respiratory tract, according to the Mayo Clinic — and his heart started to fail.

“I’m a firm believer that faith is a muscle and boy, I’ve been doing some heavy lifting.”

In the first week of November, Jones said Sammy was back in Cincinnati Children’s Hospital and by December, he was put on the heart transplant list.

For the next few months, while Sammy waited for a new heart at the hospital, he had to be put on a left ventricular assist device (LVAD), which pumped Sammy’s blood for his heart, Jones said.

“He’s been through it,” Jones said. “But that’s why we call him Superman Sammy.” 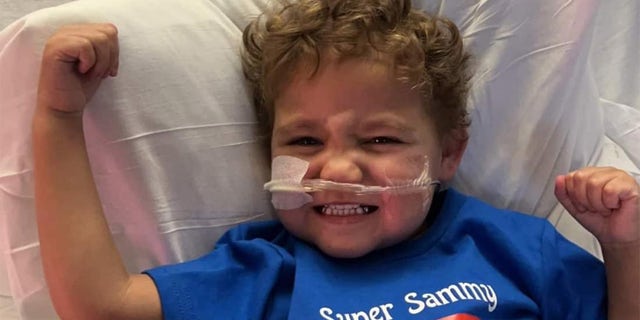 Sammy was born at Cincinnati Children’s Hospital on April 23, 2018. Immediately, Sammy underwent a 12-hour open heart surgery and stayed at the hospital for the first seven or eight months of his life, Jones said.
(Garland Jones)

Jones added that it’s been difficult to see his son go through so many health challenges, but he’s done his best to support Sammy by showing him “strength and support and love.”

“He’s been fighting for his life, and I’m right here fighting with him,” Jones said. “It’s been a true testament. It’s been an eye-opening, life-changing event for all of us.”

Jones said that Sammy has been aware of what’s been going on.

“He’s a smart kid, so he knows,” Jones said. “You can’t really sugarcoat it, you’ve just got to hold his hand and get in the fight with him.”

“It’s been a pretty long, rough road for all of us involved.”

Jones said that after a while in the hospital, Sammy started asking to go places like the zoo and Disney World. Jones told Sammy they were waiting for his new heart before traveling.

He also wanted to see his sister. Because she’s so young, she wasn’t allowed into the ICU and the pair hadn’t seen each other in months. 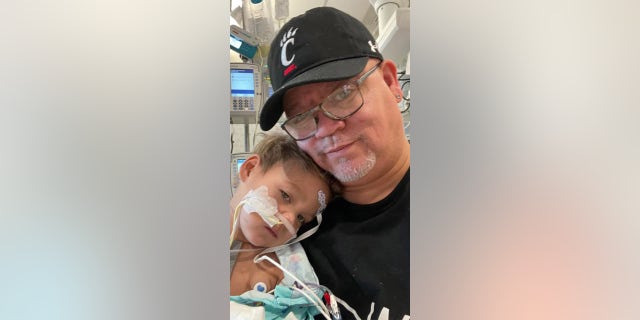 In July 2020, Sammy had his second procedure and in February 2021, he had his third surgery, Jones said.
(Garland Jones)

In March, when Jones and Sink were talking about what they were going to do for Sammy’s upcoming birthday, they decided to see what Sammy wanted.

Within a few weeks, Sammy got his wish.

Jones said they got the call on April 3 and the next day, Sammy underwent the 14-hour heart transplant surgery.

The procedure was a success but within the week, one of Sammy’s lungs collapsed, which meant he had to spend over three more weeks in the hospital. 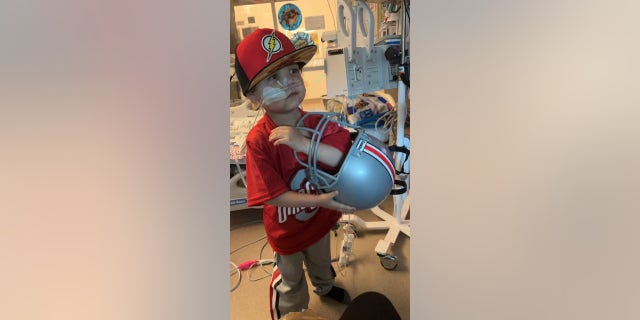 Sammy loves football — he even became famous earlier this year for his love of the NFL’s Cincinnati Bengals, according to WKRC — and adores his 6-year-old sister. Jones said the two are "attached at the hip."
(Garland Jones)

“It’s been a pretty long, rough road for all of us involved,” Jones told Fox News Digital days before Sammy left ICU.

Since the surgery, Jones has been praying for the family of the child donor who gave Sammy his new heart.

“It means the world to us,” Jones said. “This little boy [Sammy] is such a spirited soul.”

“He’s been fighting for his life, and I’m right here fighting with him.”

Jones said his family wrote a “thank you” letter and submitted it through the transplant team, which requires consent before Jones and his family can make contact with the donor’s family.

‘Not something I could bear alone’

“I’m a firm believer that faith is a muscle and boy, I’ve been doing some heavy lifting,” Jones said. “It’s tough to see your kid in distress, period.”

“People tell me all the time, they’re like, ‘Man, you’re so strong,’” Jones added. “And I wish I could say it’s me, but my flesh is weak, my Lord is mighty. I lean on him. And that’s truly my faith. My church family … is truly what’s sustained me in order to sustain him. Because it’s not something I could bear alone.” 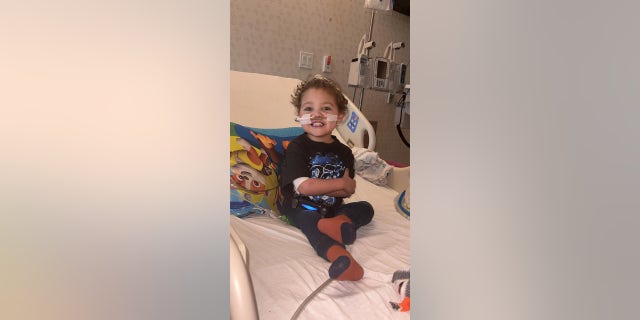 "It’s been a pretty long, rough road for all of us involved," Jones told Fox News Digital.
(Garland Jones)

Jones said his family has come together with resilience to face the challenges as a team.

“It gives you such perspective … on what’s important in life,” Jones said.

“We just try to remain grateful for every day, every moment and not take anything for granted,” Jones later added. “I know that sounds cliché, but it’s really true.”