executive Secretary Alejandro Mayorkas claimed the U.S. has “effectively managed” the ongoing border crisis even as he appeared to pass blame for the surge in migration under the Biden administration, saying the increase was due to everything from COVID-19 to climate change.

Mayorkas made the statement during testimony before the House Appropriations Committee on Wednesday. Rep. Lucille Roybal-Allard, D-Calif., asked Mayorkas how his department came to recent estimates of how drastically migration would increase if the Biden administration ended Title 42, a Trump-era COVID rule allowing for the deportation of the vast majority of migrants.

“We inherited a broken and dismantled system that is already under strain … only Congress can fix this,” Mayorkas testified. “Yet, we have effectively managed an unprecedented number of non-citizens seeking to enter the United States.” 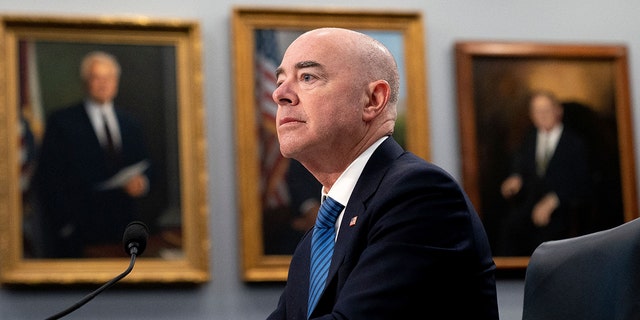 The crisis at the border appears far from managed, however, as estimates from President Biden’s administration say DHS is anticipating a rate of border encounters of 18,000 per day.

While a federal judge in Louisiana has blocked Biden’s intent to end Title 42 deportations, it remains an end goal for the administration.

Mayorkas went on to deflect blame to circumstances out of the administration’s control.

“The challenges are brought about, and made more acute, by the COVID-19 pandemic,” Mayorkas said. “Economic downturn, an increase in violence, the significant impacts of climate change – these are the forces that drive people to leave their homes that they have established and in which they have grown up for years.”

The Biden administration has repeatedly attempted to dismiss border surges as a yearly pattern. While the southern border has seen a pattern of increases in migration each spring, the surges in both 2021 and 2022 have far outpaced previous years.

Border agents made it clear to Mayorkas in late January that many of them blame the Biden administration’s policies for the border surge. Mayorkas visited border patrol agents in Laredo, Texas, on Jan. 29, and the meeting threatened to boil over as individual agents criticized his policies.

“That’s the problem, chief,” one agent interjected. “For evil to triumph is for good men to do nothing. That’s exactly what’s happening here. Good men are doing nothing. You’re allowing illegal aliens to be dropped off in communities.”

Ortiz responded by highlighting the organization’s success in drug-busting efforts, particularly with fentanyl.

“And under this administration, in the last year, we’ve got the highest fentanyl deaths in the history of our country,” another agent countered.