Eyewitness to American Airlines flight diversion over unruly traveler: He 'wanted to bring the plane down'

An eyewitness who was on an American Airlines generalbound for Washington D.C. but forced to land in Kansas City, is speaking out after an unruly passenger reportedly tried to storm the cockpit and open the plane door mid-flight.

Mouaz Moustafa joined “Fox & Friends” Tuesday to discuss the chaos, saying, although the man did not appear to be under the influence of drugs or alcohol, he said he mentioned he “wanted to bring the plane down.”

“He was attacking the crew and the passengers that were trying to subdue him and really just trying to get into the cockpit and then try to open the plane’s door in the emergency sort of latch,” Moustafa told co-host Brian Kilmeade.

“He grabbed the plane’s exit door. He’s a big guy… the air pressure maybe probably makes it almost impossible to open the door, but he actually, like, kind of shifted it a few inches, and that was scary,” he continued. 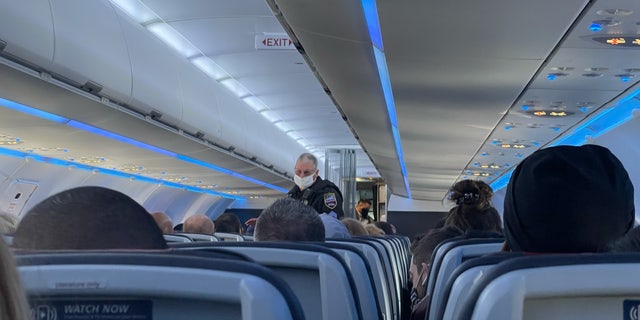 According to Moustafa, the incident happened about mid-flight on Sunday, which left Los Angeles and was originally bound for the nation’s capital.

The plane landed in Kansas City after 2:00 PM, after descending in only a handful of minutes.

“You had maybe four or five people that were trying to subdue him while the flight attendant was kind of trying to knock him out by bashing him repeatedly on the head with the coffee pot over and over again until he was finally down; there was blood, everything, and people still had to pin him down until we landed,” Moustafa said.

Moustafa praised the flight attendants and passengers involved in subduing the individual, calling them “heroes.”

“The crew of American Airlines and the brave passengers of the front, including I think it was an Air Force reserve gentleman and others, were real heroes to step up and do the right thing and make sure it’s a happy ending,” he said.

Authorities, including the FBI and other law enforcement officials, were waiting for the unruly passenger upon the plane’s abrupt landing.