With darkness closing in, Aric Almirola sprung to life late Sunday at New Hampshire Motor Speedway and pulled off the surprise victory, the first one of the year for Stewart-Haas Racing. 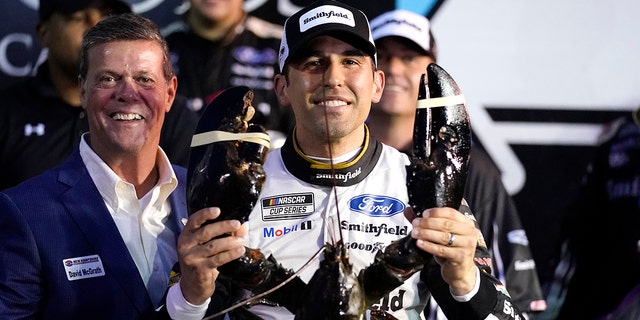 “There is no doubt we have struggled,” Almirola said. “But guess what? We’re going playoff attributes.”

The victory was a needed boost for Ford and played havoc with the playoff field with only four races left before the 16-driver field is set. The race was delayed nearly two hours by rain and attributes called it early due to darkness, leaving it eight laps shy of its scheduled conclusion.

Almirola, who entered 27th in the points standings, raced to his third career Cup victory and first since 2018 and was the first driver out of the SHR pack that includes Kevin Harvick, Cole Custer and Chase Briscoe to take the checkered flag. Almirola had only two top 10s this season.

“There have been so many people that have supported us through the crappiest year ever,” Almirola said. “Man, this feels so good for them.”

He broke up the Team Penske party — Brad Keselowksi and Ryan Blaney had a fun back-and-forth for the lead at one point — and Christopher Bell could not catch him.

Bell won the Xfinty Series race Saturday and was second. Keselowski, Joey Logano and Blaney made it a 3-4-5 finish for Team Penske.

Almirola rested his head on the car in almost stunned disbelief that he clinched his playoff spot.

“I love this race track,” he said. “I had this race won a couple of years ago and I lost it. We’ve been through so much and I just stood the test.”

Almirola snapped a 98-race winless streak and added New Hampshire to a rain-shortened win at Daytona in 2014 and Talladega in 2018 for his third win in 374 career races.

NASCAR started the race under wet conditions and that decision turned into a disaster when Kyle Busch, the polesitter, spun on the slick track and wrecked only six laps into the race. Joe Gibbs Racing teammates Martin Truex Jr. and Denny Hamlin also spun and the red flag was waved to stop the race. Truex and Hamlin returned to race. Busch’s race in the No. 18 Toyota was over and he bit his tongue on NASCAR’s call to start the race.

“It never should have gone green to begin with, but then it kept getting worse and worse lap over lap,” Busch said. “We’ve been talking about it for two laps that it was raining. There’s no sense in saying what I want to say, it doesn’t do you any good.”

Hamlin said, “this is just a bad look.”

NASCAR executive vice president Steve O’Donnell said on NBC Sports races have started in the mist but the track “got slick in a hurry.”

Chase Elliott was still soaking in his Saturday night when he raced head-to-head against his NASCAR Hall of Fame father and won the Superstar Racing Experience at the old Nashville Fairgrounds Speedway.

He got the best of 65-year-old Bill Elliott even though his father is an SRX regular. Tony Stewart was second and the elder Elliott was third.

“We were literally racing for the win of the race last night, and that was no fluke or joke or setup thing,” Chase Elliott said. “We were legitimately racing 1-2, which is incredible. Tony has been a hero of mine forever. To share the podium with both of them, I couldn’t have asked for anything to be any more special than that.”

Chase Elliott, the reigning Cup champion, said NASCAR should race at the Fairgrounds over the more remote Nashville Superspeedway.

“I’ve always felt that way, but that other track is not the answer,” he said. “The energy is right there in town, and we don’t need to search any further. That’s it for that city. No doubt.”

Kyle Larson won $175,000 and the prestigious Kings Royal dirt race in the World of Outlaws series on Saturday night and Harvick, who has his own management team, saw client Miesha Tate come out of retirement and win a UFC fight.

Summer vacation! With NBC busy with Olympics coverage, NASCAR takes a rare two-week break and does not return until Aug. 8 at Watkins Glen. Watkins Glen was bumped from the schedule last season because of the pandemic. Elliott won the last race on the road course in 2019.