In the continued search for the hypothetical ninth air-and-spacein our Solar System, Michael Brown, the CalTech air-and-spacewho led the demotion of Pluto to a dwarf planet in 2006, has co-written a new study that claims to have narrowed the region the potential new planet could be located.

The study, in conjunction with astrophysicist Konstantin Batygin, proposes “Planet Nine” exists beyond Neptune and is six times the mass of Earth, according to reports.

The scientists first proposed Pluto had a replacement in a controversial study that came out in 2016 that said the clustering of asteroids and comets and other objects that orbit the sun in the Kuiper Belt suggests the existence of a large planet, National Geographic reported.

While some astronomers said the clustering reported in the 2016 study could be a fluke or actually a black hole since Planet Nine has never been seen, Brown and Batygin determined in the study, published last month in the Astronomical Journal, that the clustering is not a coincidence with 99.6% confidence. 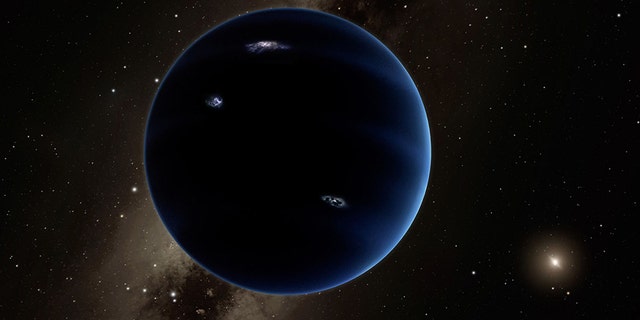 An artist rendering of the proposed Planet Nine that may orbit the sun beyond Neptune.
(CALTECH/R. HURT (IPAC))

The new study also includes a “treasure map” of the planet’s likely orbit that the scientists said lasts around 7,400 Earth years and is closer to the Sun than the 2016 study found, according to Extreme Tech.

A closer orbit to the Sun would make the planet brighter and easier to see, according to Mashable India.

Planet Nine would probably be cold gas giant like Neptune, the farthest known planet in a Solar System from the Sun. Neptune has a nonsolid surface made up mostly of hydrogen, helium, and methane, according to NASA.

The pair hope to view the first glimpse of the planet within the next few years, possibly with the new large telescope at the Vera Rubin Observatory in Chile, set to be operational in two years, according to National Geographic.