Baron Hotel in Afghanistan: What we know

Two terror outside the Kabul airport Thursday injured at least three U.S. military and others, as the U.S. attempts to continue its evacuations out of Taliban-controlled conflicts.

Terrorist group ISIS-K is suspected to be responsible for the attacks. The extent of the injuries and deaths is not yet clear. Pentagon press secretary John Kirby confirmed that there have been U.S. and civilian casualties. 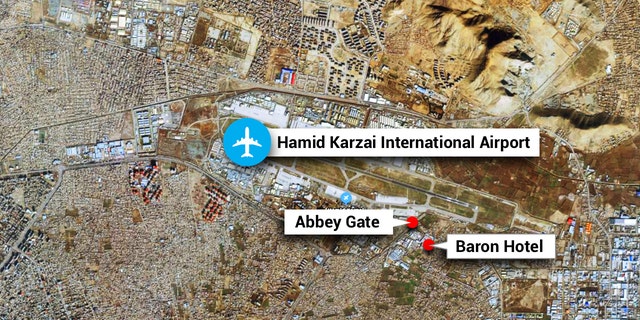 One of the explosions occurred outside the Baron Hotel – but why attack this hotel in addition to such a high-profile target as the Hamid Karzai International Airport?

What is the Baron Hotel?

The 160-room hotel stands less than a mile from the airport, near Camp Sullivan.

The hotel’s website says it is provides “safe, secure housing, lodging and or accommodation in Kabul, Afghanistan.”

The description touted the hotel’s security, as it sits within the “buffer zone of security” due its proximity to the airport and the International Security Assistance Force (ISAF).

ISIS-K: WHAT TO KNOW ABOUT TALIBAN RIVAL SEEN AS THREAT TO AFGHANISTAN EVACUATION

Why attack the Baron Hotel?

The hotel has served as a processing center for Afghan people hoping to flee the country as the Taliban take control.

The hotel served as a gathering point for American citizens in the past for rescue and evacuation. Secretary of State Antony Blinken on Wednesday said that up to 1,500 Americans may still be in the country. The attack may have attempted to target a large number of American citizens.