A member of the new-york-city” target=”_blank”>New York< were seen earlier in the day gathering and swarming around the pole on 47th Street and the Avenue of the Americas, also known as 6th Avenue, prompting onlookers to stop and snap photos, at a safe distance of course. 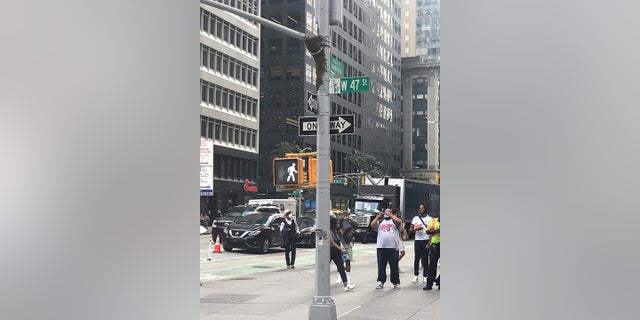 Onlookers gather Tuesday to watch a large colony of bees gather around a light pole in midtown Manhattan.
(Fox News)

Coincidently, the gathering spot was right outside Fox News headquarters.

The New York Police Department told Fox News it was sending a beekeeper to the area to confront the critters.

The department tweeted a video informing followers that longtime police beekeeper, Officer Darren Mays, had retired. Another officer identified only as Det. Travis was seen trying to suck up the swarm of bees through a vacuum. The bees were expected to be relocated, police said.

The NYPD said no injuries or car accidents related to the bee invasion were reported. Authorities were not sure why they chose the busy spot to form a colony but there was no threat of an invasion, they said.

In July, Mays removed 10,000 bees from Times Square. He came back two weeks later to the same area and removed a smaller swarm.