Fox News Digital reported in October that DHS was planning on issuing a memorandum to allow Afghan civil servants who worked during the Taliban regime to be exempted from terrorism-related inadmissibility grounds (TRIG) if they fulfill other background and screening requirements.

Fox has since obtained a “pre-decisional” version of that memo from March that outlines how DHS intends to exempt certain individuals from TRIG — which places limits on individuals who are members of a terrorist organization or who have engaged in terrorism, making them inadmissible to the U.S. and ineligible for immigration benefits.

The USCIS website says that the definition of terrorism-related activity “is relatively broad and may apply to individuals and activities not commonly thought to be associated with terrorism.”

As a result, the Biden administration wants to allow exemptions for those who were employed as a civil servant in Afghanistan due to Taliban rule between 1996-2001, or after August 15, 2021.  The memo says that, without the exemption, those who could be caught up in TRIG could include teachers, doctors, sanitation workers and low-level administrative clerks.

“Many civil servants held these positions prior to Taliban control of government functions and continued in their roles thereafter due to pressure, intimidation, or other situations of hardship,” the memo states, and says the exemption requires that the individual establish they did not “voluntarily and knowingly engage in terrorist activity on behalf of the Taliban.”

The memo also outlines exemptions for those who have “participated in resistance movements against the Taliban and the Soviet Army,” including those who have fought under the direction of the U.S. government. It does not include those who have targeted non-combatants, U.S. interests, engaged in torture or human rights violations. 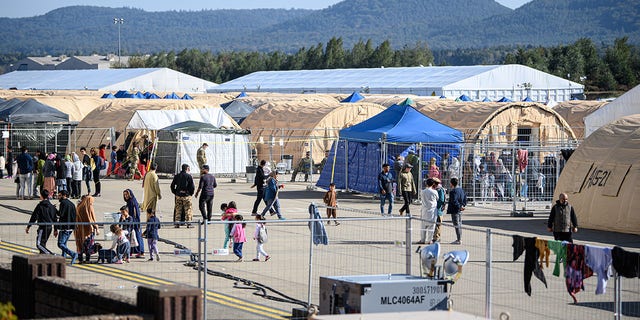 Oct. 9, 2021: Young evacuees from Afghanistan are playing and running around at the U.S. military’s Ramstein air base in Ramstein, Germany. (Photo by Lukas Schulze/Getty Images)

It would also allow an exemption for those “who provided certain insignificant and certain limited material support to designated terrorist organizations (Tier I/II), or to a member of such an organization.  The memo says that this is needed because people living under Taliban rule have needed to interact with the Taliban due to its control of governmental entities, roads and utilities — it says that even paying a fee to obtain a travel document from a Taliban entity could mean an Afghan could be excluded via TRIG.

It would not include anyone who an immigration official “knows, or has reasonable grounds to believe, is engaged in or is likely to engage in after entry in any terrorist activity.”

The memo itself appears to acknowledge concerns about potential abuse by those who have deeper terror ties, warning that DHS “must ensure appropriate mechanisms are in place to ensure individuals do not obfuscate their affiliation with a Tier 1 or Tier 2 foreign terrorist organization by attempting to shape a narrative that would qualify for an exemption.”

So far more than 76,000 Afghans have been brought to the U.S. in the wake of the withdrawal from Afghanistan in August, which saw significant criticism for the chaotic way in which the U.S. pulled out in the face of the advancing Taliban.

The memo says that both the State Department and the Justice Department have reviewed and provided input on the exemptions, and the authority is “simultaneously being prepared for the Secretary of State’s signature.” A source familiar with the memo told Fox that the DOJ has reviewed and cleared the move,

In a statement to Fox, a DHS spokesperson said that “no such exemptions have yet been approved.”

“Afghans who are cleared to enter the United States must first successfully complete a multi-layered and rigorous screening and vetting process, which includes reviews of fingerprints, photos, and other biometric and biographic data by counterterrorism, intelligence, and law enforcement professionals at the Departments of Defense, Homeland Security, and State, the Federal Bureau of Investigation, National Counterterrorism Center, and other Intelligence Community partners,” the spokesperson said.

The Biden administration’s effort to resettle tens of thousands of Afghans has frequently faced concerns from Republicans and others about the vetting system in place to stop criminals and terrorists entering the U.S.

A Pentagon inspector general report issued in February found that officials identified at least 50 Afghan evacuees who were brought to the United States in the wake of the U.S. withdrawal from Afghanistan whose information indicated “potentially significant security concerns” –and were unable to locate dozens of those who it said had “derogatory information” that would make them ineligible for parole.

Last month, DHS designated Afghanistan for Temporary Protected Status, meaning nationals already present in the U.S. can remain for at least 18 months without risk of being deported.

Share
Facebook
Twitter
Pinterest
WhatsApp
Previous articleAmy Schumer raises awareness about adult autism spectrum disorder through her husband’s recent diagnosis
Next articleAmber Heard has symptoms of borderline personality disorder according to forensic psychologist: What is it?