Biden pushed the Senate to take a vote on House-passed legislation that would expand background checks and close certain loopholes.

“I strongly, strongly urge my Republican friends in the Congress who refuse to bring up the House-passed bill to bring it up now,” Biden said. “This has to end. It’s a national embarrassment.”

Speaking at a joint White House press conference Friday with Japanese Prime Minister Yoshihide Suga, Biden was pressed on whether he needs to prioritize police reform and gun control measures in the wake of more mass shootings and police-related deaths. 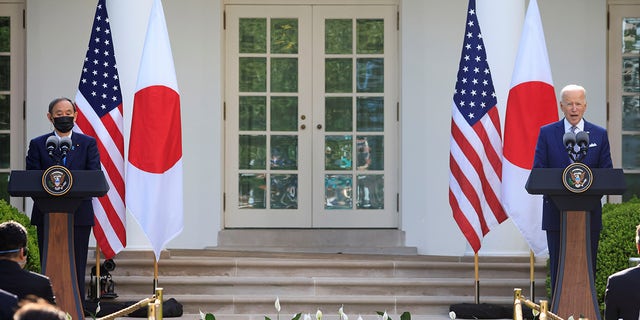 Biden rejected the notion that guns have taken a backseat to his infrastructure and coronavirus agenda in Congress and he doubled down on his support for banning assault weapons and high-capacity magazines.

“I strongly support the universal background checks, which I continue to push. And Congress has to step up and act. The Senate has to act,” Biden said. “I strongly support and … never stopped supporting the ban on assault weapons and magazines that hold more than 10 bullets.”

Biden said “no one has worked harder” than him on ending gun violence and he pointed to his work in the Senate to pass the now-expired 1994 assault weapons ban. He said he’s committed to passing such gun restrictions again.

The first hurdle, though, will be getting support for a universal background check bill in the Senate that’s split 50-50. The House already passed legislation to expand federal gun background checks on all firearms sales and extend the background check review period from three days to a minimum of 10 business days.