The former president made headlines a month ago when he endorsed Budd as he gave the keynote address at the North Carolina GOP convention. Budd, who was first elected to Congress in 2016, is facing off against former Gov. Pat McCrory and former Rep. Mark Walker for the Republican nomination in the race to succeed retiring GOP Sen. Richard Burr in the key battleground state.

Trump endorsed Budd moments after his daughter-in-law Lara Trump announced that she would not run for the Senate in her native state of North Carolina.

“Immediately thereafter people were sending in donations. I think it clarified things,” Budd said in an interview with Fox News on Friday, minutes before his speech at thecpac”> Conservative Political Action Conference <

Budd said that until Lara Trump’s announcement, “a lot of people were holding off on supporting any candidates.”

And he emphasized that “a lot of people from around the nation are supporting” his campaign due to the former president’s endorsement. “They’ve dedicated their support for me. They’ve sent financial support. It’s just really clarified things….Right now this has really accelerated it, so I’m grateful for it.”

Long a red state, North Carolina has become increasingly competitive in recent cycles. Last November Trump narrowly captured the state by a razor-thin margin over now-President Biden. And GOP Sen. Thom Tillis won reelection by less than one point when Democratic challenger Cal Cunningham was politically wounded after news of his extramarital affair made major headlines prior to the election.

Nearly $300 million – a national record for a Senate campaign – was spent by all sides in the 2020 showdown in North Carolina, and the 2022 race is also expected to be extremely expensive.

McCrory announced on Friday that he brought in $1.2 million in the April-June second quarter of fundraising. Neither Budd or Walker, who’s also speaking at CPAC Dallas, have yet to reveal their fundraising figures from the past three months.

Budd said that he’ll release his figures in a few days and predicted that “they’ll be strong….We’ll probably have pretty good cash on hand.” But he acknowledged that “we’ll probably be out raised.”

But he highlighted that “what you’ll see if you look closely at the numbers is us accelerating.”

SECOND THIEL ALLY JUMPS INTO THE BATTLE FOR THE SENATE

Asked by Fox News if Trump’s agreed to join him on the campaign trail closer to next year’s primary, Budd said “that’s going to up to him and I would only hope that he would join me because he’ll certainly be helpful.” 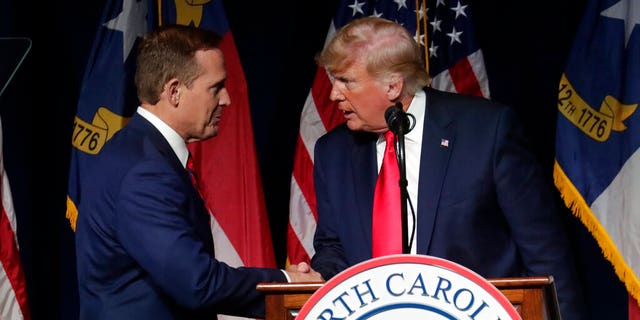 And about that endorsement from the former president  – Budd shared that he only learned about it “minutes before” but added that “the relationship goes back to 2017” when the then-president and his family supported Budd through a challenging re-election. “Lara came in and helped me in 2018 when the Democrats were outspending me…They’ve just been wonderful to work with.”

The race in North Carolina could be one of a handful of crucial contests next year which may decide whether the GOP recaptures the Senate majority it narrowly lost in the 2020 election cycle.

The chamber is evenly split 50/50 but the Democrats control the chamber by a razor-thin margin due to the tiebreaking vote of Vice President Kamala Harris through her constitutional role as president of the Senate.

Republicans are playing plenty of defense – they’re defending 20 of the 34 seats up for grabs, including open seats in North Carolina, the swing state of Pennsylvania, as well as in Ohio, Missouri, and Alabama. But they see opportunities to flip blue seats red next year in four states: Arizona, Georgia, Nevada, New Hampshire.

Fox Nation is a sponsor of CPAC and will be streaming live speeches from the most influential conservatives at CPAC 2021: America Uncanceled. Sign up on foxnation.com to hear their message to America.