A us-regions man is in crime” target=”_blank”>federal custody< exit door in the middle of a cross-country flight on Sunday and told a flight attendant that “we’re going to bring down the plane,” according to an affidavit.

Juan Remberto Rivas, 50, had to be subdued by other passengers and flight attendants with zip ties and tape. He is facing one count of assaulting and intimidating a flight attendant.

About two hours into the flight from los-angeles” target=”_blank”>Los Angeles< he sensed that something was wrong and went to the front, where he said Rivas was “holding a glass bottle in one hand and was trying to open the cockpit door with his other hand.” Rivas also allegedly tried to open the airplane’s exit door at some point.

“Rivas then grabbed some plastic silverware, removed the napkin wrapped around it, and placed the plastic silverware in his shirt sleeve and was holding it like a shank,” a flight attendant told the FBI, according to the affidavit. “He then grabbed a small champagne bottle by the neck of the bottle and attempted to break the bottle on the counter.” 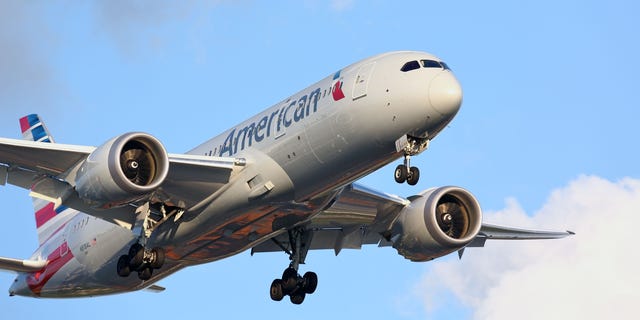 The cross-country American Airlines flight was diverted to Kansas City after the incident.
(iStock)

Other passengers joined the flight attendants in subduing Rivas as the plane diverted to Kansas City.

“As people were trying to subdue him and everything, the same flight attendant runs all the way to the back and grabs like a coffee pot, goes all the way to the front and starts bashing this guy, like in the head,” Mouaz Moustafa, a passenger on the plane, told Fox News Digital on Sunday.

Rivas was restrained with zip ties and tape until the plane landed, where police were waiting for him.

Attorney General Merrick Garland issued a directive in November to prioritize the prosecution of federal crimes on aircraft after a surge in unruly midair behavior during the pandemic.