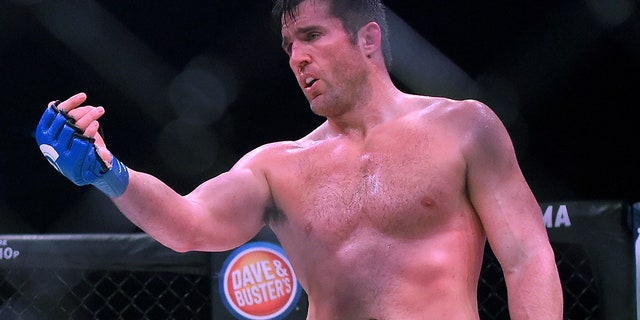 Chael Sonnen stands in the cage as he defeated Quinton Jackson in their heavyweight world title fight at Bellator 192 at The Forum Jan. 20, 2018, in Inglewood, Calif.
(Jayne Kamin-Oncea/Getty Images)

On Friday, Christopher and Julie Stellpflug filed a lawsuit against Sonnen, claiming he repeatedly punched them in a hallway of the hotel around 7:30 p.m. Sonnen is accused of choking Christopher as Julie “continued to yell and scream for help,” an arrest warrant stated. Sonnen then threw Julie against a light fixture and punched her in the face, she told police.

Soon after, a security guard, a hotel engineer and another man staying at the hotel all attempted to intervene. According to an arrest warrant, Sonnen punched the security guard in the throat and punched the engineer in the face. Police said at least three people were hospitalized. 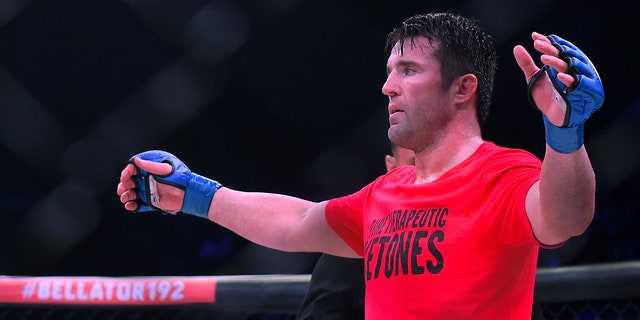 Referee Mike Beltran raises the arm of Chael Sonnen as he defeated Quinton Jackson in their heavyweight world title fight at Bellator 192 at The Forum Jan. 20, 2018, in Inglewood, Calif.
(Jayne Kamin-Oncea/Getty Images)

State prosecutors had filed an amended criminal complaint and requested that the district attorney’s office review the case in light of the March 14 charges.

At the hearing Wednesday, Sonnen’s defense attorney, Dayvid Figler, said he “realized that the more appropriate way to move forward would be with this amended complaint.”

The Stellpflug’s attorney, Kory Kaplan, said his clients objected to the reduced charges, saying it contradicted what prosecutors had told them. Kaplan said the felony charge was related to injuries Christopher Stellpflug told police he received in the attack.

“After the charges were filed, they were contacted by a deputy district attorney who confirmed that felony charges were appropriate,” Kaplan said during the hearing, according to the Review-Journal.

Sonnen had a career 29-15-1 record in the UFC. He competed in three title fights, losing twice to middleweight champion Anderson Silva and once to light heavyweight champion Jon Jones.

In recent years, Sonnen was an MMA analyst for ESPN.

“Chael will not appear on ESPN as we explore the details of these serious charges,” ESPN said in a statement.