College football Week 10 preview: An afternoon in Athens, an evening in Baton Rouge

The first half consists of September and October when teams jockey for position in the Associated Press and coaches’ polls. It’s a time when fun non-conference schedules are played and the cupcakes come to town. 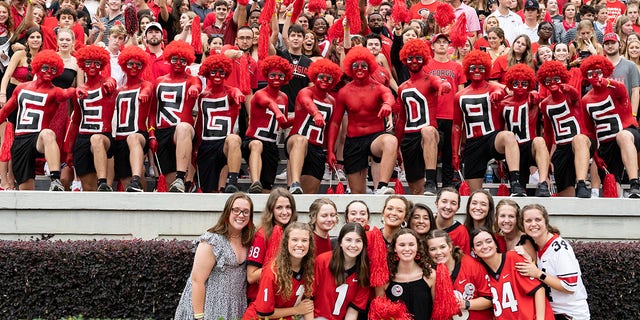 The Paint Line and fans cheer on their team during a game between the Samford Bulldogs and Georgia Bulldogs at Sanford Stadium Sept. 10, 2022, in Athens, Georgia.
(Steve Limentani/ISI Photos/Getty Images)

It’s also a time when conference play begins, setting the table for the second half of the season when the battle for conference championships will be settled.

And then there’s the second half of the season, when the College Football Playoff committee becomes the focus of the college football world as we inch closer to New Year’s Eve when the semifinals are played.

The first CFP rankings came out Tuesday, and they have provided us with one heck of a college football Saturday.

Let’s look at a few games to be aware of Saturday as the college football season kicks off Week 10.

Would it be an overstatement to call this game “The Game of the Century?”

Maybe. But it sure has a nice ring to it. 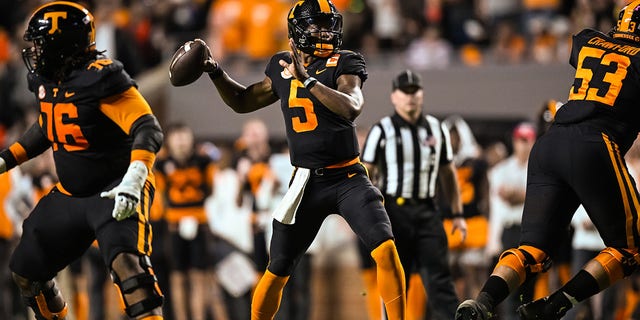 The Vols will travel to Athens, Georgia, ranked No. 1 in the CFP rankings for the first time in program history. It’s a classic battle of opposites as Tennessee comes in with the top offense in the country and Georgia will counter with a defense that’s second in the nation in points allowed per game (10.5).

GEORGIA LOSES NFL DRAFT PROSPECT FOR THE YEAR WITH TORN PECTORAL AHEAD OF MARQUEE MATCHUP WITH TENNESSEE: REPORT

Georgia’s defense did take a big hit earlier in the week when outside linebacker Nolan Smith underwent surgery to fix a torn pectoral suffered in last week’s game against Florida.

“They’re athletic. They can run, all three levels,” Tennessee head coach Josh Heupel said Monday when asked about the Georgia defense. “They’re physical on all three levels. They don’t have any busts. They play their assignments extremely well. They make you earn it. It’s a great test for us. You’re going to have to win one-on-ones. 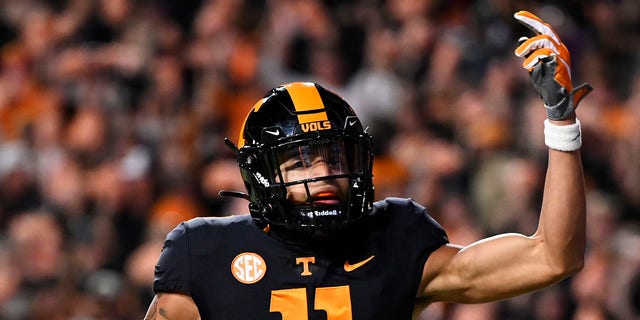 Jalin Hyatt of the Tennessee Volunteers celebrates his touchdown against the Kentucky Wildcats at Neyland Stadium Oct. 29, 2022, in Knoxville, Tenn.
(Eakin Howard/Getty Images)

“That’s out on the perimeter. That’s in the offensive line — in the trenches — and you’ve got to be able to sustain drives.”

Georgia will be facing its biggest challenge of the year as the Tennessee offense has been unstoppable under Heupel and Heisman favorite Hendon Hooker.

“Tennessee is not necessarily a pass-happy offense,” Georgia head coach Kirby Smart said, according to ESPN. “They run the ball really well. I think you could say that statistically they have explosive passes. They are a running team that chunks it deep. They do a really good job with explosive pass plays. They commit to the run. There is a toughness there. Their backs run really tough.” 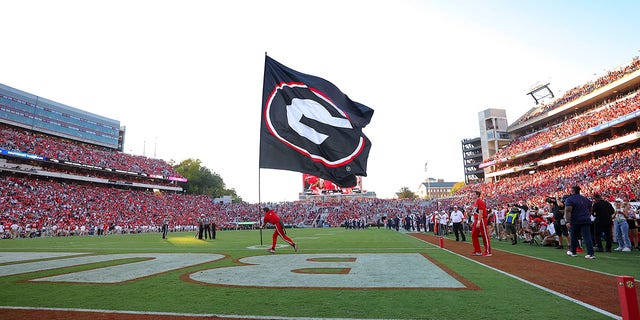 The field after a Georgia Bulldogs touchdown in the second half against the Auburn Tigers at Sanford Stadium Oct. 8, 2022, in Athens, Ga.
( Todd Kirkland/Getty Images)

The winner of the game “between the hedges” will set itself up for a berth in the SEC championship game and establish itself as the top team in the country.

It should be a thing of beauty.

All eyes will be on the SEC for the two biggest games of the day as Nick Saban and his one-loss Crimson Tide head to Baton Rouge, Louisiana, for a matchup with Brian Kelly and the Tigers.

Both teams are trying to hand each other a second loss in the SEC. There are three teams — Ole Miss being the other — tied atop the West with a conference record of 4-1.

Alabama is coming off its bye week after drubbing Mississippi State and is hopeful the week off has allowed quarterback Bryce Young a few extra days of healing for his injured shoulder. 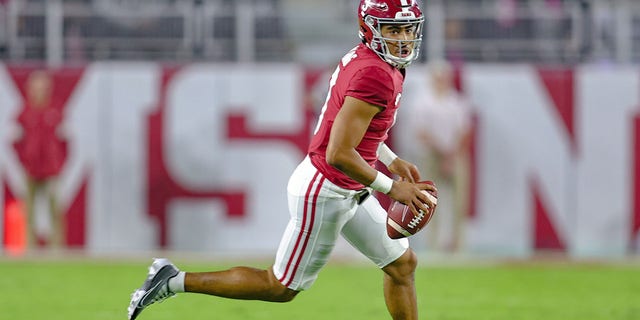 Bryce Young of the Alabama Crimson Tide runs the ball during the first half against the Mississippi State Bulldogs at Bryant-Denny Stadium Oct. 22, 2022, in Tuscaloosa, Ala.
( Brandon Sumrall/Getty Images)

In the two games since sitting out against Texas A&M, Young has completed 56 of 87 attempts for 704 yards, four touchdowns and zero interceptions.

The LSU defense will be tasked with trying to stop Young, a dual-threat quarterback, a type of quarterback that the Tigers’ defense has struggled against this year.

But this is why Kelly left South Bend for the Deep South. He wanted a chance to beat the best. 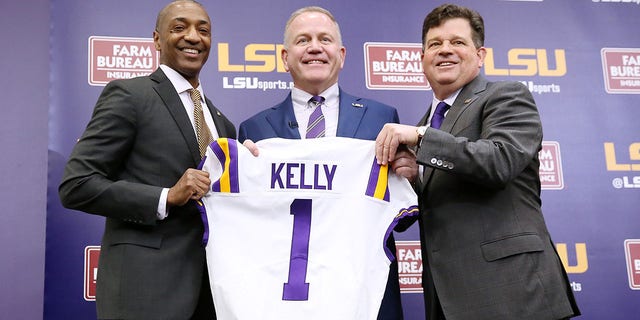 He has his opportunity and will need a big game from quarterback Jayden Daniels to get his first win against Saban in three tries.

Against Ole Miss in Week 8, Daniels threw for two touchdowns and rushed for three more.

On the season, Daniels has thrown for 1,812 yards and 12 touchdowns while rushing for 524 yards and nine touchdowns. 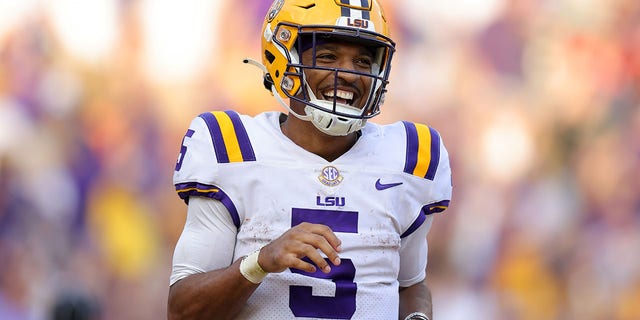 Jayden Daniels of the LSU Tigers celebrates a touchdown during the second half against the Mississippi Rebels at Tiger Stadium Oct. 22, 2022, in Baton Rouge, La.
(Jonathan Bachman/Getty Images)

“(Kelly’s teams) always have balance on offense,” Saban said, according to The Tuscaloosa News. “They’re going to run the ball. They got a very good throwing scheme. Utilizing the personnel that they have very, very well.

“They’ve historically played very well on defense and special teams. It’s typical of what a well-coached team usually does. They’ve gotten to the point where — and all of his teams have been this way — they don’t beat themselves. You’ve got to execute and beat them, and I think that’s got to be the focus for our team.”

Texas head coach Steve Sarkisian gets another chance to improve his record in true road games as the Longhorns head to Manhattan, Kansas, looking to avoid their third loss in conference play.

In the two years that Sarkisian has been in Austin, the Longhorns are just 1-6 in true road games, including blowing a 14-point lead against Oklahoma State in Week 8 at Boone Pickens Stadium. 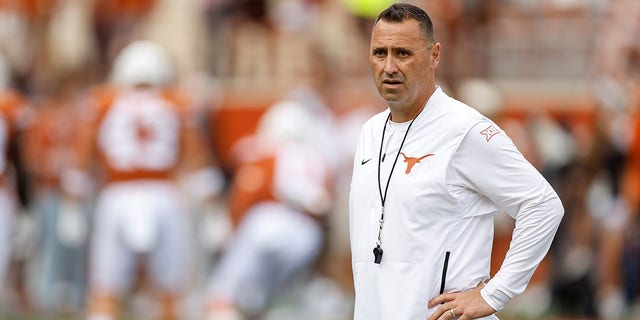 It’s the same team that Kansas State smacked in Week 9, embarrassing the Cowboys 48-0 at home.

“I think that we’ve played good football,” Sarkisian said this week, according to ESPN. “I think we’ve got a team that’s committed for this final month of the season, but we have to be cautious not to look down the road. We’ve got to focus on this game, and we’ve got to handle our business this week, and it’s going to be a heck of a game.”

The Wildcats were without starting quarterback Adrian Martinez against Oklahoma State but didn’t skip a beat with backup quarterback Will Howard.

Kansas State rushed for 199 yards in Week 9, 158 of those yards coming from running back Deuce Vaughn. 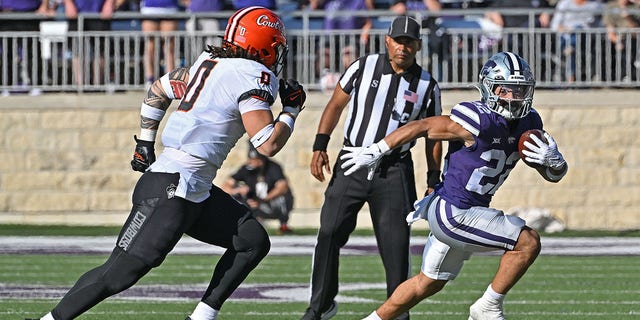 Running back Deuce Vaughn (22) of the Kansas State Wildcats runs to the outside against linebacker Mason Cobb (0) of the Oklahoma State Cowboys during the first half at Bill Snyder Family Football Stadium Oct. 29, 2022, in Manhattan, Kan.
(Peter G. Aiken/Getty Images)

Martinez has practiced all week, but Kansas State will not make a decision on who will start under center until closer to kickoff.

“We are prepared for both, we have to,” Sarkisian said Monday, according to ESPN. “Obviously the style of player that Adrian Martinez is in the quarterback run game is a real factor in the success they had with him. And then, obviously, Will Howard, his ability to really throw the ball and push the ball down the field.”

There were many in the world of college football who disagreed with Clemson’s ranking in the first College Football Playoff poll Tuesday.

And while a win in South Bend, Indiana, certainly won’t quiet all the naysayers, a Tigers win over Notre Dame in primetime surely will prove to some that the Tigers firmly belong in the CFP conversation. 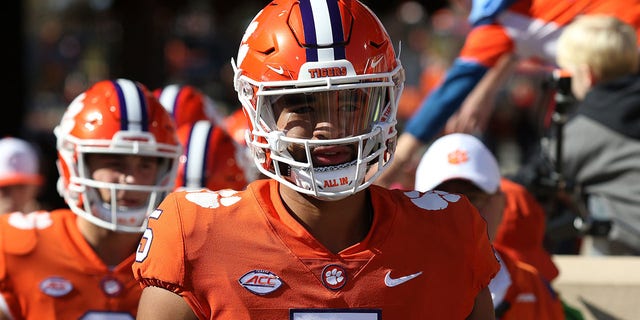 “The biggest thing is not making the game bigger than it is,” Clemson quarterback DJ Uiagalelei said. “It’s a big environment. It’s going to be a night game and all the external factors. I think, at the end of the day, you’ve just got to go out and play football.”

DEION SANDERS GIVES EMOTIONAL SPEECH TO JACKSON STATE AHEAD OF SWAC MATCHUP: ‘WE ARE ALL VALUABLE’

Uiagalelei has been much improved compared to last year, throwing for 17 touchdowns to just four interceptions. But Uiagalelei was benched by head coach Dabo Sweeney in Clemson’s Week 8 win over Syracuse in favor of freshman Cade Klubnik after Uiagalelei committed three turnovers.

“We’re people, and people are not perfect, Sweeney said this week, according to ESPN. “We have moments from time to time. You have to be made of the right stuff to be able to let it help you get better. We’re not 8-0 if it’s not for DJ. He had a bad game, but that’s why you have a team.

“I’m really proud of DJ, and how he’s handled himself and how he’s led. He knows he can’t go play like that. There’s a standard. He’s the ace. You’ve got to go do your job.” 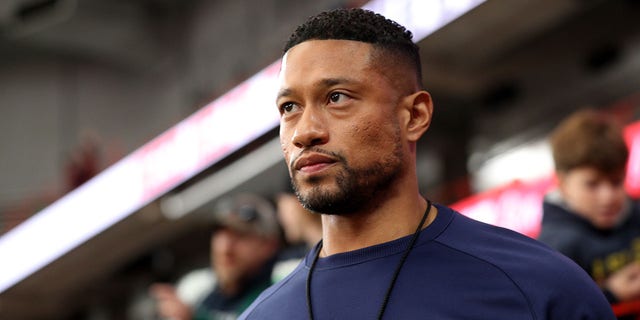 Head Coach Marcus Freeman of the Notre Dame Fighting Irish walks to the field prior to a game against the Syracuse Orangemen at JMA Wireless Dome Oct. 29, 2022, in Syracuse, N.Y.
(Bryan Bennett/Getty Images)

He’ll be facing a Notre Dame team that has improved since its disastrous 0-2 start to the season, winning five of six games in head coach Marcus Freeman’s first season as the helm.

“This is what we do, we play in big games like this,” Freeman said. “It’s not a David vs. Goliath. This is a heavyweight fight. We’ve got a dang good football team.”

Other games of note: