crime have lifted some evacuation orders for a mountain community in drought-stricken southern New Mexico as firefighters worked Saturday to contain a wind-driven blaze that killed two people and destroyed over 200 homes.

The evacuation orders lifted late Friday covered about 60% of the estimated 4,500 people originally ordered to leave their homes since the fire started Tuesday, but specific numbers weren’t immediately available, Village of Ruidoso spokesperson Kerry Gladden told The Associated Press on Saturday. Evacuation estimates were previously reported to be around 5,000 people.

“The big story is we’re in a re-population mode,” Gladden said earlier during a media briefing. 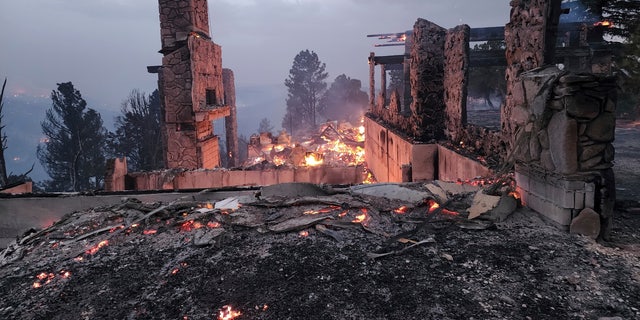 The remains of a home left after a wildfire spread through the Village of Ruidoso, New Mexico, on Wednesday, April 13, 2022.
(Alexander Meditz via AP)

Those evacuation orders remaining in effect may be lifted in coming days, officials said.

Those waiting to return included Barbara Arthur, the owner of a wooded 28-site RV park that had wind damage but didn’t burn.

“We feel blessed,” said Arthur, who on Saturday was staying at a motel and preparing taco ingredients to take to another RV park for dinner with people displaced by the fire, including some of her tenants.

Arthur said the fire came within a half-mile (0.8 kilometer) of her park and that she saw flames while evacuating. “It’s the scariest thing I’ve ever been through in my 71 years of living,” she said. 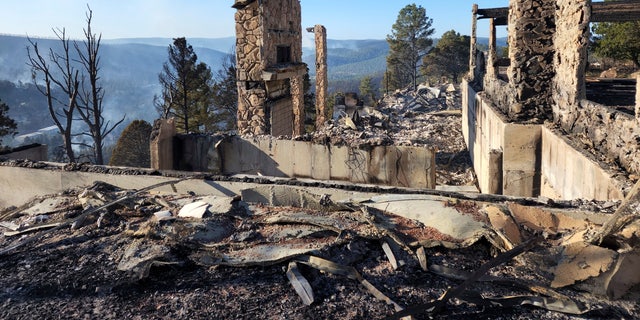 The remains of a home left after a wildfire spread through the Village of Ruidoso, N.M. on Wednesday, April 13, 2022.
(Alexander Meditz via AP) 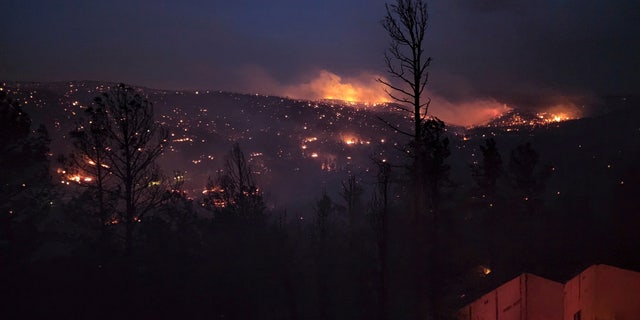 Fire burns along a hillside in the Village of Ruidoso, N.M., on Wednesday, April 13, 2022.
(Alexander Meditz via AP)

disasters incident commander Dave Bales said crews worked to put out hot spots and clear lines along the fire’s perimeter to keep the fire from spreading. The fire has no containment but Bales expressed a mix of satisfaction with work done so far and prospects for coming days.

Weather conditions Saturday appeared favorable with reduced wind and increased humidity, Bales said. “We have lines in. We just want to make sure they hold in that wind,” he said.

The fire and the winds that spread it downed power lines and knocked out electricity to 18,000 customers. Electricity has been restored to all but a few dozen customers, said Wilson Guinn, a Public Service Co. manager.

But people returning to their homes needed to be cautious and call utility officials if they encounter downed lines, Guinn said.

“We may have missed something,” Guinn said. “Don’t try to touch them, fix them, roll them up, whatever.”

Gladden, the village spokesperson, said residents also need to be aware that the strong winds earlier in the week may have damaged trees that could still fall or lose limbs.

“It’s important that what started this whole event was a significant wind storma>,” she said.<

Ruidoso a decade ago was the site of the most destructive wildfire in New Mexico’s recorded history when more than 240 homes burned and nearly 70 square miles (181 square kilometers) of forest were blackened by a lightning-sparked blaze.

While many older residents call Ruidoso home year round, the population of about 8,000 people expands to about 25,000 during the summer months as Texans and New Mexicans from hotter climates seek respite.