Double banana shocks hungry student: 'It was a once-in-a-lifetime find'

The world is full of amazing sights.

Everybody knows what to expect to find when they peel back the skin of a banana: a single banana sitting inside. A student in England, however, discovered that sometimes, the banana will contain something special. 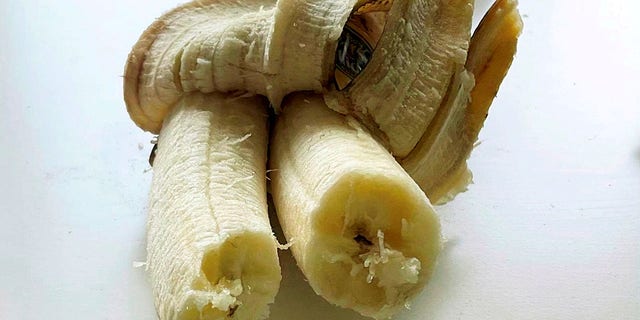 Aiden Martin peeled open a double banana during a break at his job at Asda, a grocery store, and found what he called a "once-in-a-lifetime" find.
(SWNS)

Aiden Martin peeled open a double banana during a break at his job at Asda, a grocery store, Southwest News Service (SWNS) reports. According to him, it was a “once-in-a-lifetime” find.

SWNS reports that about 5% of bananas will grow with two fruits inside of the skin, but it’s very rare for one of these double-bananas to actually make it to shelves.

“They were like a little couple camping,” Martin told SWNS. “They were all nice and cozy like they were in one of those little double sleeping bags. They weren’t joined at all, just lying next to each other. I think it was a once-in-a-lifetime find.”

Unfortunately, there was one major flaw with the bananas.

“I wish I could say they were two for the price of one,” Martin explained, “but sadly it’s done on weight.”

This is not the first double banana to be found by a lucky snacker.

In June of last year, Tom Symes bought a banana from a grocery store in England and didn’t realize anything was unusual about it until he got home.

Tom told SWNS, “I didn’t realize what I had in my basket until I got it home. When I opened it I saw that the bit where they joined in the middle was really weird. It was completely flat. I was skeptical about eating it, but then I thought ‘waste not want not’ and I gave the other one to my mom. We found it funny at first, but then realized it was still just a banana at the end of the day.”

Unlike Martin’s banana, Tom’s appeared to be joined at the bottom.