Most of Lilly Rockwell’s earliest childhood memories are plagued with pain-managementto the point of vomiting. Her migraine disease worsened into adulthood as she worried over the impact it would have on her career and personal life.

Biohaven’s findings for its late-stage trial of rimegepant, a calcitonin gene-related peptide receptor antagonist, were published in The Lancet, and according to a company release, the drug dropped migraine days by 30% after a week when taken every other day while about half of participants saw at least a 50% decline in moderate-to-severe migraine days at three months. The drug works by blocking a receptor associated with the cause of migraines.

“I was able to focus more time and energy on my career helping people find their dream homes and my social life,” she wrote in an email. “I could enjoy more of the little things in life, and I felt for the first time what it’s like to live as a person who doesn’t get migraines.”

The drug is now available to patients who experience fewer than 15 migraine days each month. Some of the most common side effects, according to the FDA, include nausea, stomach pain and indigestion, though these effects occurred in about 2% of trial participants, and serious side effects include allergic reactions, trouble breathing and rash.

AUSTRALIA SAYS ASTRAZENECA VACCINE ONLY FOR PEOPLE 60 AND OLDER

The drug’s approval, according to several experts, will “significantly impact the way” the medical community thinks and treats migraines.

“In the past, treatments were considered as either abortive — taken after a migraine begins, or preventive — taken at a regular cadence to prevent a migraine,” Dr. Zubair Ahmed, a neurologist and headache specialist with Cleveland Clinic who was not involved with Biohaven or rimegepant, said. “However, the indication for rimegepant as a rescue and preventive shifts this paradigm of treatment.” 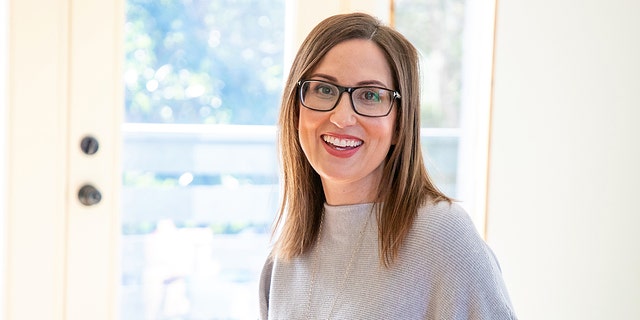 Rockwell, 37 of Austin, Texas, was a participant in a clinical trial for Biohaven’s Nurtec ODT (rimegepant) as a preventive migraine treatment.
(Photo courtesy of Biohaven)

According to Vlad Coric, MD and CEO of Biohaven Pharmaceuticals, the approval “resulted in a paradigm shift in the management of this disease…This means that for the first time, one medication therapy can be used to both treat migraines as they occur and prevent the next one.”

Further, Dr. Richard Lipton, director of Montefiore Headache Center, involved in the drug’s development and clinical trials, said other migraine medications may bring on more headaches after frequent use, or a phenomenon known as medication-overuse headache, though rimegepant was said to demonstrate the opposite effect.

“Migraines can be severely debilitating and are considered one of the main causes of disability worldwide,” according to the Centers for Disease Control and Prevention (CDC),” with “15.3% of Americans aged 18 years or older reporting a migraine or severe headache in the previous 3 months, a figure that has remained stable for almost two decades.”

But despite the watershed moment, hurdles will likely persist with regard to access for patients. Ahmed said it’s a “costly treatment available primarily for patients with commercial insurances.”

What’s more, Eli Lilly recently announced it launched a head-to-head study testing once-monthly injectable Emgality (galcanezumab-gnlm) against Nurtec ODT (rimegepant) for the prevention of migraine. While Emgality was said to bind to the protein playing a role in migraine onset, Nurtec blocks the receptor.

“This study aims to answer important questions that will help clinicians and patients make more informed treatment decisions on the path to more migraine-free days,” Lilly wrote in a company announcement.

The news prompted a response from Biohaven’s Coric.

“Nurtec ODT is clearly establishing itself as the leading migraine therapy with a profile that others want to aspire to,” Coric wrote in part, in an emailed statement. “In our opinion, this study by Lilly is a competitive move by a company with an injectable drug to try to hold market share despite shifting sentiment to oral CGRP targeting drugs now being approved for the prevention of migraines.”