Before Saturday night, Dusty Baker had managed the most games in Major League Baseball history without winning a World Series title.

Baker made his managerial debut in 1993 with the San Francisco Giants. They lost the World Series in seven games in 2002 to the Anaheim Angels. He didn’t make another one until last year, but the Houston Astros lost to the Atlanta Braves.

Finally, he has a ring.

The Astros took down the Philadelphia Phillies in six games to win their second title in franchise history, and the first of Baker’s career as a manager. 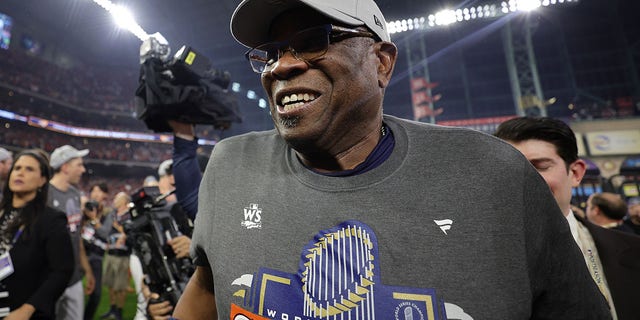 He won one with the Los Angeles Dodgers in 1981 as a player, but for the three-time Manager of the Year, this was a blatant missing piece on the resume.

Baker was mobbed by players and coaches at the moment Kyle Tucker caught the final out. He is now the oldest manager to win a World Series in MLB history, at 73 years of age, and his lack of a title had become a rallying cry for the team and its fanbase.

“They were as happy for me as I was, but it was about us,” Baker told the Fox post game crew of Kevin Burkhardt, Alex Rodriguez, David Ortiz and Frank Thomas. “I kept seeing those signs, ‘Do it for Dusty’ and the players were staying ‘Hey we’re gonna do this for you….’ I was like ‘Hey man, that’s cool and everything, but let’s do it for us, let’s do it for the city of Houston and do it for hopefully all the stuff that we’ve been going through the last three years. Hopefully it’s over.’ You gotta let it ride. Because these guys are some good ballplayers. Great ballplayers.”

He heard all the noise that he couldn’t win and wouldn’t win.

But a baseball lifer, he always believed in himself.

Houston Astros manager Dusty Baker was mobbed by players and coaches at the moment Kyle Tucker caught the final out.
(Carmen Mandato/Getty Images)

“I’m tired of hearing it. ‘He doesn’t do this, he doesn’t do that.’ All I heard about what I can’t do,” he said. “But my mom and dad taught me perseverance. And you gotta persevere, you gotta believe in yourself.”

At the same time, he had his doubts when he was unemployed from the end of 2017 to the beginning of 2020.

Now that he has a ring, there’s only one thing to do.

“Party!” he said during the trophy celebration. 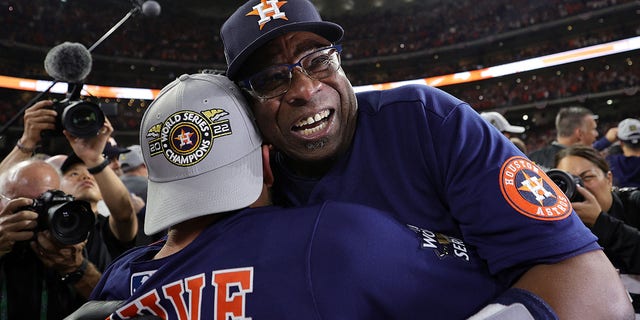 Manager Dusty Baker Jr. and Jose Altuve of the Astros celebrate after defeating the Philadelphia Phillies in the World Series on Nov. 5, 2022, in Houston, Texas.
(Carmen Mandato/Getty Images)

And then after that?