“Real Time” host Bill Maher closed his show Friday night by complaining that the Democrats have become a “no fun” party in comparison to the Republicans.

“Once upon the time, the right were the ones offended by everything,” Maher said. “They were the party of speech codes and blacklists and moral panics and demanding some TV show had to go.

“Well, now that’s us. We’re the fun-suckers now. We suck the fun out of everything: Halloween, the Oscars, childhood, Twitter, comedy. It’s like woke kids on campus decided to be all the worst parts of a Southern Baptist.”

He continued: “If Democrats had always policed morality as hard as they do now, they’d be down a lot of heroes. No FDR, JFK, RFK, LBJ, Clinton, Martin Luther King.

“Democrats are now the party that can’t tell the difference between Anthony Weiner and Al Franken.”

“We need to restore the natural order of things,” Maher told viewers at another point. “I don’t want to live in a world where liberals are the uptight ones and conservatives do drugs and get laid.

“I don’t want to live in a world where liberals are the uptight ones and conservatives do drugs and get laid.”

He also complained that former U.S. Rep. Katie Hill of California, once a rising star among liberals, was forced out of Congress for being in a “throuple” and having nudes photos leaked with her holding a bong, saying “that was too much for our puritanical Democratic Party.”

“We’re the throuple people! The bong people, the tantric sex gurus, not f—in’ Matt Gaetz! Us!” Maher shouted. “We did f—ing in the mud and bra burning and ‘Turn On, Tune In, and Drop Out.’ They’re the party who can’t bake wedding cakes for gay people! It’s time to switch back because, frankly, you’re not good at being us and being you sucks.”

Earlier in the monologue, Maher had pointed to recent stories about Republicans appearing to be a wild bunch.

He spoke about U.S. Rep. Matt Gaetz, R-Fla., and cited a report that alleged the congressman had used drugs “like cocaine and ecstasy.”

“Wild hotel suite parties? That’s our thing,” Maher reacted. “Democrats are the party of free love and fun and forgetting where you parked your car. Republicans cannot be the conservative, stick-up-your-ass party and then take our drugs and f— our women. 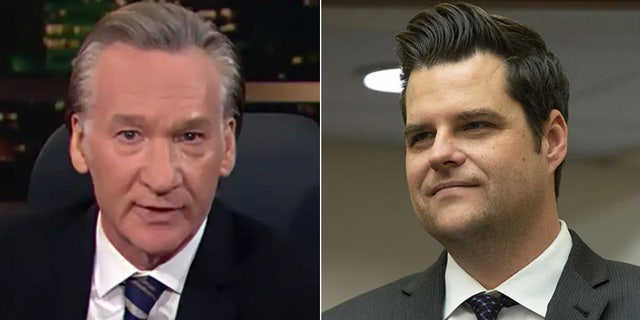 “JFK used to have nude pool parties in the White House. Now the politician who comes closest to carrying on that legacy is Matt Gaetz? No,” Maher told viewers.

“JFK used to have nude pool parties in the White House. Now the politician who comes closest to carrying on that legacy is Matt Gaetz? No.”

“What happened?!?” Maher exclaimed. “You can always count on Republicans to be the fuddy-duddies, the wet blankets, the bores. They were the Moral Majority, ‘The Book of Virtues.’ Nixon — NIXON! — started the ‘war on drugs’ and [Nancy Reagan] never stopped spinning her catchphrase about it. … Her husband had a commission to root out pornography.

“If it was fun, Republicans were against it. They got apoplectic over Bill Clinton getting a b——.”