The rocket’s first stage booster touched down on the droneship – called “A Shortfall of Gravitas” – at 11:27 a.m. ET. Dragon separation was confirmed just before 11:30 a.m. ET.

The Ax-1 mission sends four private space travelers on a 10-day flight to conduct science and push the boundaries of commercial spaceflight.

“During the mission, the crew will spend eight days on the International Space Station conducting research, outreach and commercial activities,” Axiom said in a statement. 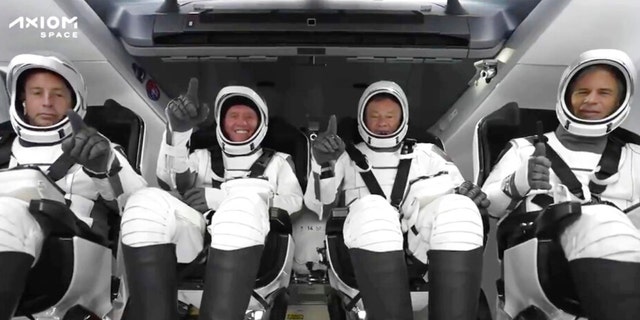 This photo provided by SpaceX shows the SpaceX crew seated in the Dragon spacecraft on Friday, April 8, 2022 in Cape Canaveral, Fla. SpaceX is scheduled to launch three rich businessmen and their astronaut escort to the International Space Station for more than a week’s stay.
(SpaceX via AP)

They’ll arrive at the orbiting laboratory on Saturday after a more than 20-hour flight, and are set to return on April 19.

Friday’s flight is the second private charter for SpaceX, which took a billionaire and his guests on a three-day orbit ride last year.

Axiom is targeting next year for its second private flight to the space station.