RALEIGH, N.C. — planet-earth weakened to a depression and spawned several apparent tornadoes in Georgia and North Carolina on Tuesday as it dumped heavy rains into the Appalachian mountains along a path that could cause flash floods as far north as upstate New York.

One death was reported — a Las Vegas man whose car hydroplaned near Panama City, Florida, Monday night and overturned into a water-filled ditch, the Florida Highway Patrol said.

Fewer than 30,000 customers were without power in Florida and Georgia after the storm crashed ashore late Monday afternoon near Cape San Blas in the Florida Panhandle. Emergency crews were repairing downed power lines and clearing toppled trees in Fred’s aftermath. Some schools and colleges in Florida, Alabama and Georgia canceled Tuesday’s in-person classes due to the storm.

The National Hurricane Center said Fred had top sustained winds of 35 mph (56 kph) as it crossed southeast Alabama into western and north Georgia. Senior hurricane specialist Stacy Stewart said Tuesday that it could dump 5 to 7 inches (13 to 18 centimeters) of rain into parts of Alabama, Georgia and the Carolinas — and possibly up to 10 inches (25 centimeters) of rain in isolated spots, causing flash flooding in mountainous areas.

Clay Chaney, a meteorologist with National Weather Service, said a local fire chief in North Carolina told the agency a tornado was on the ground in northern Iredell County early Tuesday afternoon. The weather service was also looking into reports of a tornado hitting Alexander County. As many as 14 possible tornadoes were reported across Georgia, South Carolina and North Carolina, according to the weather service. 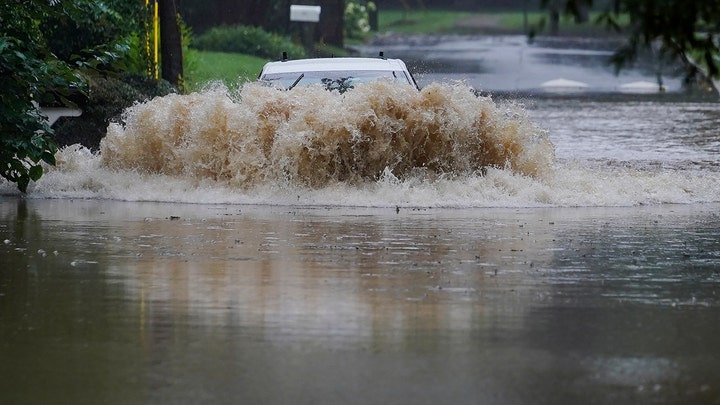 Transylvania County Chairman Jason Chappell, a lifelong resident, said it was the most intense flooding he’s seen in at least 20 years, and that he fears more damage to come. Floodwaters swamped a local factory Monday with several inches of water and damaged its parking lot.

“It really caught everyone off guard,” Chappell said. “No one was forecasting that amount of rain.”

With Fred blowing in Tuesday, National Weather Service meteorologist Ashley Pratt said Haywood, Transylvania and Jackson counties are likely to get the most rain, including another 6 to 8 inches (15 to 20 centimeters) in Transylvania.

One of the region’s major attractions, Grandfather Mountain State Park, closed on Monday. The North Carolina state park’s website said “trails are flooded and the water at stream crossings (is) dangerously high.”

At least six apparent tornadoes touched down in Georgia: One hit Americus, in the southwestern part of the state, damaging at least a dozen homes and an apartment complex. One hit Jeffersonville, near Macon, tearing metal siding off a sporting goods warehouse, knocking over a semitruck trailer and tossing around small boats, according to the National Weather Service. One destroyed a mobile home in Banks County, northeast of Atlanta, officials reported.

Grace’s sustained winds grew to 50 mph (85 kph) as it left Haiti on a westward path between southeastern Cuba and Jamaica. Forecasters said it could be near hurricane strength as it approaches Mexico’s Yucatan peninsula late Wednesday or early Thursday.

Tropical Storm Henri, meanwhile, was about 135 miles (215 kilometers) south-southeast of Bermuda. The small tropical cyclone had 65 mph (100 kph) winds and was expected to circle widely around the island, the hurricane center said.

Share
Facebook
Twitter
Pinterest
WhatsApp
Previous articleTucker Carlson: Vaccine mandates are not about COVID, but about autonomy and rational decision-making
Next articleGreg Gutfeld: Our leaders botched the Afghanistan withdrawal, they were too busy destroying the US