A naughty Dachshund was caught using an American bulldog as a canine ladder to jump over a kitchen gate.

The one-year-old pup, Darcie, was caught on camera using her brother, Benson — an American Pocket Bulldog — as a step stool to get over the doggy gate put up in the kitchen by their owner.

After continuously coming home and seeing Darcie in the window, Mary Warwick of Burbidge, Leicestershire, England, said she decided to put up a camera to see how the sausage dog was escaping from her kitchen confinement.

“We were coming home, and she [would be sitting] in the windowsill,” she said.

“Or I’d open the front door, and she’d come running out, and I was wondering how and why.” 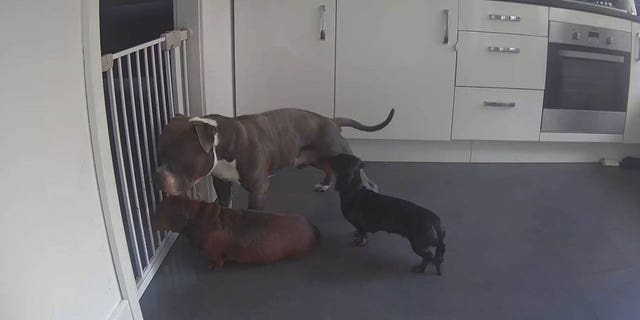 Darcie wanted to escape the gated area of the kitchen — so she hatched a canine conspiracy to get over the gate.
(Kennedy News & Media)

But after installing a camera, Warwick was not expecting to see what she did.

DOG QUIZ! HOW WELL DO YOU KNOW YOUR FACTS ABOUT CANINES?

In the video above, Darcie can be seen jumping on Benson’s back before putting her paws on the top of the gate — and pulling herself to freedom. 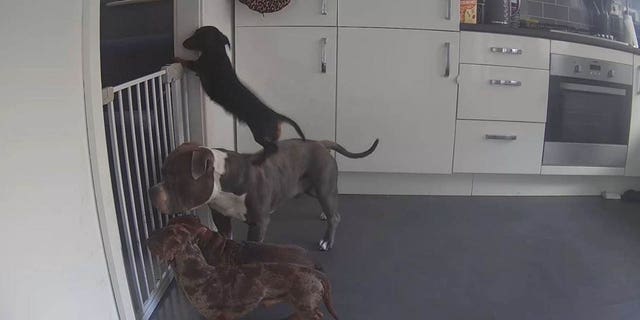 Darcie uses Benson’s back as a step stool to make it to the top of the gate.
(Kennedy News & Media)

“She’s always been an absolute monkey since I’ve had her, and it’s only [this dog] that escapes,” said the pets’ owner.

CAVALIER KING CHARLES SPANIEL: WHAT TO KNOW ABOUT THE DOG BREED FIT FOR A NEW KING

Warwick said Benson could easily snatch up Darcie, but he has the softest, sweetest personality — she called him a gentle giant. 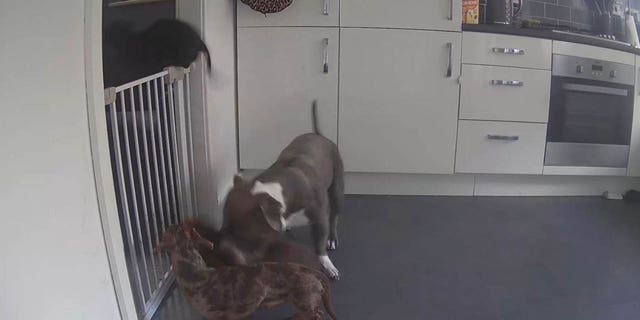 However, Warwick said Darcie is her one dog that will always find a way to make a mess — calling her mischievous. 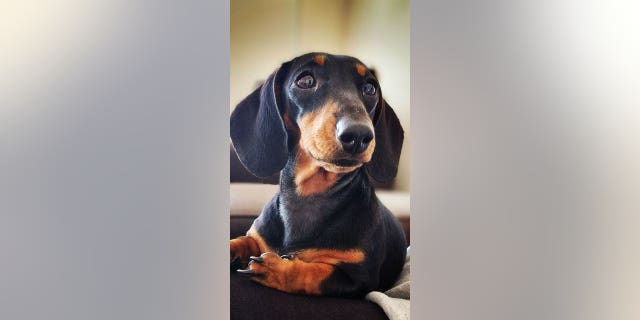 The Dachshund Darcie was caught on camera escaping from the gated kitchen.
(Kennedy News & Media)

“Darcie’s the one that if there’s a toilet roll available, she’ll go and thread it,” she said.

“You can’t leave washing in the kitchen, as she’ll pull all the clothes down,” said Warwick.

To learn more, watch the video at the top of this article!