“Came the Lightening” also will include photographs and images of mementos and will have an introduction by Martin Scorsese, who directed a 2011 documentary about George Harrison.

“Olivia evokes the most fleeting gestures and instants, plucked from the flow of time and memory and felt through her choice of words and the overall rhythm,” Scorsese writes. “She might have done an oral history or a memoir. Instead, she composed a work of poetic autobiography.” 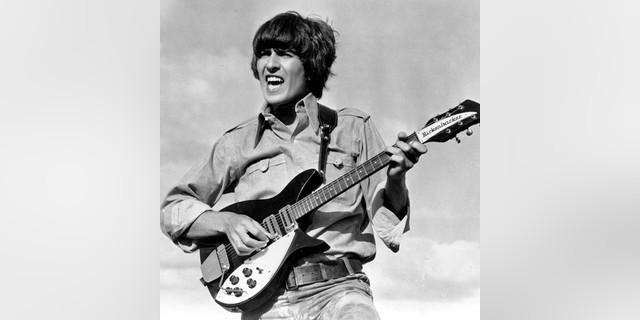 Beatle George Harrison is shown playing the guitar in a scene from the Beatles movie "Help!" on location in the Bahamas in 1965.
(AP Photo/File)

Olivia Arias met George Harrison in the mid-1970s while she worked in the marketing department of A&M Records, which distributed Harrison’s Dark Horse label. They married in 1978, a month after the birth of their son, Dhani. George Harrison died of cancer, at age 58, in 2001.