EXCLUSIVE: Republican Gov. Brian Kemp of us-regions says he’ll make a clear contrast between himself and likely 2022 Democratic nominee Stacey Abrams as he gears up for a potential titanic rematch with Abrams in next year’s gubernatorial election in the key general election battleground state.

And Kemp, who is facing the wrath of donald-trump” target=”_blank”>Donald Trump< next year, says he’s not taking “anything for granted in a primary or general election” but promises that “nobody’s going to outwork me.”

Kemp, in his first national interview since this week’s gubernatorial campaign announcement by Abrams, told Fox News on Thursday that “I’ve been gearing up for this for three years.” And he described the looming rematch with Abrams as “a fight for the soul of our state, again.”

Abrams, the former Georgia House Democratic leader who in 2018 made history as the first Black woman gubernatorial nominee of a major political party, narrowly lost to Kemp by less than 55,000 votes out of nearly 4 million cast in the Peach State’s gubernatorial elections” target=”_blank”>election< become the first Democrat to carry the state in a presidential election in nearly three decades and in fueling the Democrats’ sweep of Georgia’s Jan. 5 twin Senate runoffs, giving them the majority in the chamber.

In this Monday, Nov. 2, 2020, file photo, Stacey Abrams speaks to Biden supporters as they wait for former President Obama to arrive and speak at a campaign rally for Biden at Turner Field in Atlanta. Abrams, the 2018 Democratic gubernatorial nominee in Georgia, on Dec. 1, 2021, announced her candidacy for governor in 2022.
(AP Photo/Brynn Anderson, File)

Looking ahead to next year’s campaign, the governor spotlighted “a clear contrast” between Abrams and what he called “the conservative leadership that I’ve provided, keeping our economy open, keeping our schools open, keeping our churches open, standing with law enforcement.”

Kemp, who was one of the first governors to reopen last year after the coronavirus pandemic swept the nation, also took aim at the Biden administration’s record in office, arguing that “nobody likes the federal overreach that we’re seeing and all the things that are coming along with it. Thirty-year highs in inflation, the disaster we’ve seen at the border. Every state in the country’s dealing with that. The disastrous pullout in Afghanistan.”

And the governor emphasized that “I’m running on the record that I ran on in 2018 when I told people what I was going to do, and I’ve been doing that and people can look at that record.”

He touted “making Georgia the number-one state in the country for business, growing our economy even in the middle of a global pandemic, largest teacher pay raises in state history, passed 52 health care bills dealing with transparency and antiquated outdated rules and regulations, lowering private sector health insurance costs but also working to provide more access to the needy that are out there.”

And Kemp pledged to showcase the voting bill he signed into law earlier this year, which Democrats decried as a voter suppression measure.

“Georgians support the ability to participate in elections but also making sure they’re secure, and that’s what this bill does,” Kemp stressed. He highlighted the voter ID requirement on absentee ballots, the securing of drop boxes, continuous counting on election night, and allowing counties to add additional days for weekend voting. 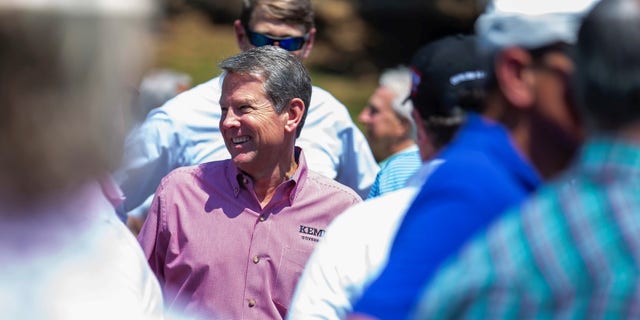 Kemp said he’s been “gearing up politically” for another difficult election.

“After the last governor’s race and what we saw in 2020, I’m no fool to the situation that we’re in. I know that it’s a tight environment, just like it was in Virginia. We’ve got to work extremely hard,” he noted.

“I know that I’ve got to raise twice the money that I raised in ’18 because of what Stacey Abrams did. We got outspent two to one, even as I raised record amounts of money,” he said.

And he said that “David’s told me he was going to support my campaign for governor. Until something happens otherwise, I’m going to keep doing what I’m doing. I can’t control who may be getting in the race.”

And taking an apparent jab at Perdue’s reasoning for jumping into the race, the governor said, “I’ve been in the fight for all these issues … I’m going to keep being in the fight. You know if somebody else wants to get into that fight, you just have to ask them why?”