Global health aid agency Unitaid is donating 220 specialized portable breathing devices to Ukraine that can help save lives of premature babies even in frontline hospitals where there is no electrical power.

Russia’s invasion of Ukraine on Feb. 24 has seen hundreds of hospitals damaged or destroyed, disrupting supply lines and placing newborn babies at risk of death or disability from a lack of access to equipment and oxygen.

Herve Verhoosel, spokesperson for Unitaid, told a media briefing that the war was causing extra stress on pregnant women, leading to an increase in the number of premature births, which had tripled in some areas. 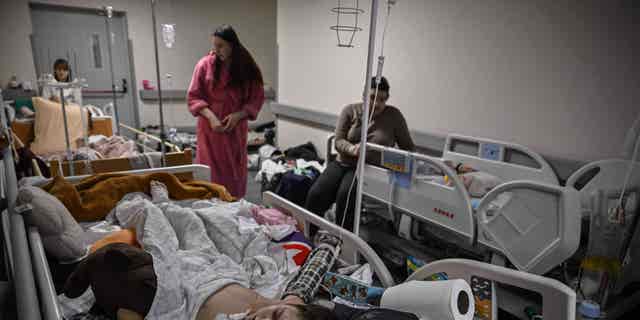 Global aid agency to donate 220 breathing machines to under supplied and overcrowded Ukrainian frontline hospitals, such as this Kyiv hospital, as seen on Feb. 28, 2022.
(ARIS MESSINIS/AFP via Getty Images)

Unitaid funds medical innovation programs mainly in poor countries, and is hosted by the world-health-organization” target=”_blank”>World Health Organization< she had seen medical staff who sleep in the basement every night, and constantly have to move children on ventilation machines.

“So having very portable devices that can function offline is absolutely critical,” she told the briefing.

RUSSIA-UKRAINE WAR: DEADLY FIGHT IN DONBAS ‘ONE OF THE MOST BRUTAL BATTLES… FOR EUROPE,’ ZELENSKYY SAYS

Unitaid partnered with Vayu Global Health, a non-profit that specializes in low-cost healthcare equipment for developing countries, to provide the Kenya-made bCPAP machines, which cost around $500 each, as well as 125 oxygen blender systems.