Greg Gutfeld: What's really missing from the Left is compassion

So, guess what it’s time for: Everything is Racist!

So tonight, a tale of two coasts, and two elections.

As you know, there’s a recall going on in us-regions. Except this recall isn’t for defective airbags.  It’s for a defective windbag, namely, his royal haircut, gavin-newsom” target=”_blank”>Gavin Newsom<

So the reason for the recall isn’t crime” target=”_blank”>rampant crime<, or even the Kardashians. It’s not that Californians can’t get water, or go outside. It’s not high taxes or legalized larceny. Its racism.

Yes, they claim that its white supremacy that’s led to the recall in California, one of the most liberal states in the nation. Next, they’ll blame all these forest fires on burning crosses.

See their logic is that it’s the racists who are painting California as a hotbed of crime and homelessness. And those things actually aren’t real – just propaganda from some amorphous band of bigots. Makes me wonder if the people who write for the LA Times have ever been to California?

Have they been los-angeles” target=”_blank”>downtown<

But damn – if only there was a way to refute that claim. You know, like, what if the leading Republican challenger was black?

Nah, that’s too crazy.  No one would believe that. But there it is. – that guy is Larry Elder – the Black man who earlier had been called the “black face of white supremacy,” by another columnist.

If that’s true, he’s been in blackface for almost 70 years. That kind of commitment would make Rachel Dolezal jealous. Now, if you said those things about a elections candidate who happened to be black, you’d be canceled faster than a Cosby show reboot.

Now they’re making the argument that Larry Elder isn’t “really” black. Because, for Democrats, Blacks are great, until you challenge the Democrats. Then it’s about the content of your character. And to them, you only have character if you stay on their plantation.

Meanwhile, on the other side of the country – there’s another election, and maybe some hope for cleaning up new-york-city” target=”_blank”>New York City<

I never thought I’d see the day when a crazed man attacks a car with a spatula. But that indeed happened here in NYC. First, we’re getting carjacked, now we’re getting flap jacked. I don’t know if I should call the cops or IHOP. The dude was later subdued and beaten by a mob. But this is what happens when DA’s start waffling.

So Curtis Sliwa is running for mayor – and he seems to actually give a damn about the people living on its streets. And not the streets whose residents head to the Hamptons at the first sign of trouble.

A video made the rounds – and it’s worth watching. Hey, nancy-pelosi” target=”_blank”>Pelosi< whole life isn’t one big photo op. But that’s what’s really missing from the left – compassion. Along with logic, reason, and truth.

The Left pretends that their policies help those less fortunate, but a stroll down the street in a major blue city proves otherwise. We see the consequences. And most of them are asking you if you can spare any change, sticking a gun in your face, or showing you their junk. And those are just the Democratic mayors. 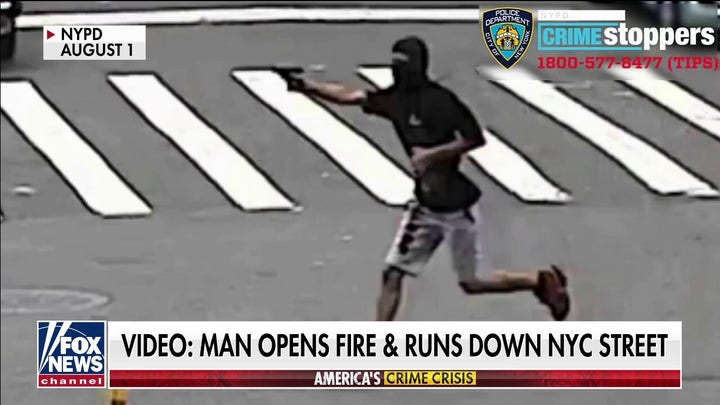 People like that disturbed man suffer on the sidewalks of New York, Los Angeles, atlanta” target=”_blank”>Atlanta<, seattle” target=”_blank”>Seattle< in sight. That’s what happens when you have no competition. Ruin.

And real sensible Democrats should be pissed – because, without loyal opposition, their party degrades into a motley bunch of woke brain-dead malicious zombies.

It’s not like the Republicans are saviors by any means– you just need two parties, to keep each other from destroying itself. It’s time we did something to turn the tide.

But it’s gonna take more than one guardian angel to defeat a bunch of Marxist devils and save those two states. It’s going to take a rebirth of Republicanism. Too bad they’re all moving to Texas.

This article is adapted from Greg Gutfeld’s opening monologue on the September 3, 2021 edition of “Gutfeld!”

Share
Facebook
Twitter
Pinterest
WhatsApp
Previous articleTucker Carlson: Our military has been lying to us for 20 years
Next articleHurricane Larry hits Category 3 in Atlantic, may cause rough surf, rip currents along East Coast: report