Groom surprises stepdaughters with adoption proposal at wedding: 'It was priceless'

Becoming a parenting” target=”_blank”>stepfather< because he has been in their lives for seven years.

RING VIDEO REVEALS SWEET MOMENT WHEN MAN CARRIES BRIDE OVER THRESHOLD: ‘YOU SEE IT IN ALL THE MOVIES’

He first met the pair when they were infants and recalls they seemed to show their approval early on, which is something he and Burton now believe was a sign that they were “destined” for each other. 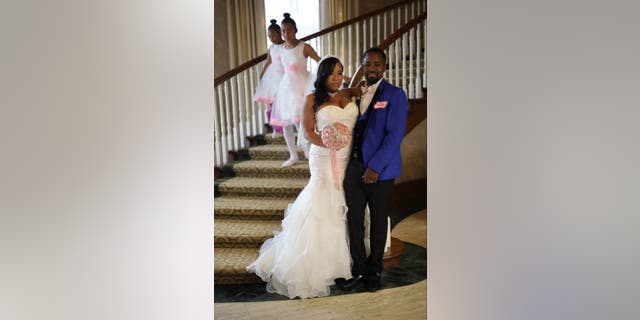 Dontez Williams and Myshella Burton got married in Detroit, Mich. on Aug. 13, 2021. Burton’s daughters Abigail and Natalie went on to play a big role in their wedding ceremony.
(Leon Spraggins Photography / @leonspragginsphotography)

A few days before their Aug. 13 wedding in Detroit, Michigan, Williams began thinking of all the ways he could make the day special for Abigail, 9, and Natalie, 8.

Williams said he eventually settled on the idea of proposing adoption because he realized he was “kind of like the only father-figure they had ever really had.”

In his own words, “Just the thought of me writing the vows for them, it made me want to tear up. When I felt that emotion just thinking about it, I was like, ‘I got to do this. This is the right decision. There’s no ifs, ands or buts about it.’”

When he got positive feedback from his co-workers, Williams went forward with his plans. He made sure to keep the vows a secret from his family-and-friends” target=”_blank”>family<

While Williams delivered his vows, he noted that both girls initially had confused expressions on their faces because he had not done this at the rehearsal. They quickly caught onto what was going on and the tears began to flow.

His wife was also surprised by the offer as they all stood at the altar together as a family, Williams said.

“Myshella was really shocked, but she was happy and just thankful for me stepping up,” he added. “She was really happy that I feel that way for them and said she’s grateful to have me in their lives.”

Williams and Burton first met on the dating website Plenty of Fish. They got engaged in 2017 and originally had plans to host their wedding in 2020, but the pandemic pushed the date back an extra year.

Williams, who is originally from Cleveland, Ohio, moved to Detroit more than 20 years ago. Today, he works as a case manager at Starfish Family Services where he helps children between the ages of 6 and 16.

Burton works in the medical field and has made the switch from surgical technologist to obstetrics. She currently works in a child birthing center where she helps women deliver babies.