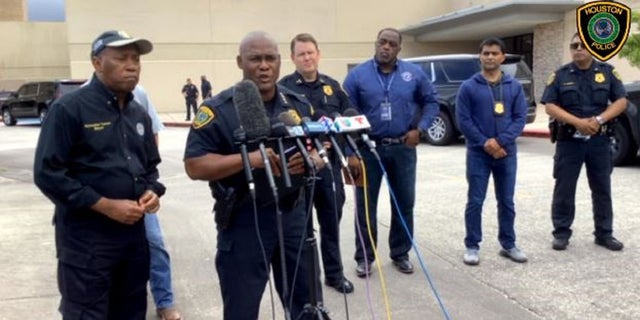 When the shots rang out, another officer “immediately engaged with his hands” to take custody of the 26-year-old suspect, Finner said. His name will be released once he is charged, Finner said.

The officers did not return fire, he said. The chief said he has not yet reviewed the footage taken from the officers’ body-cameras but plans to watch it.

“Hand-to-hand in battle, when you’re close in, sometimes you don’t even have a chance to draw a weapon and you have to go hands-on,” Finner said.

The unidentified injured officer is an 11-year-veteran of the police force and a married father of three assigned to the department’s Kingwood Division, Houston Mayor Sylvester Turner said. The shooting occurred in Houston but across the Harris County line in neighboring Montgomery County, Finner said.

An investigation into the incident will be coordinated between a special Houston Police Department investigative unit and the Montgomery County District Attorney’s Office.