A city in Maine is trying to solve a huge mysterya> after a giant rubber duck appeared in its busy harbor. <, on Saturday, according to the New England Cable News. No one knows who put it there.

The station reported that the duck is anchored in shallow watera> between a pedestrian bridge and the town landing. <

Harbor Master Katherine Given told the Bangor Daily News that the duck doesn’t pose a navigational hazard, so there’s no rush to shoo it away. 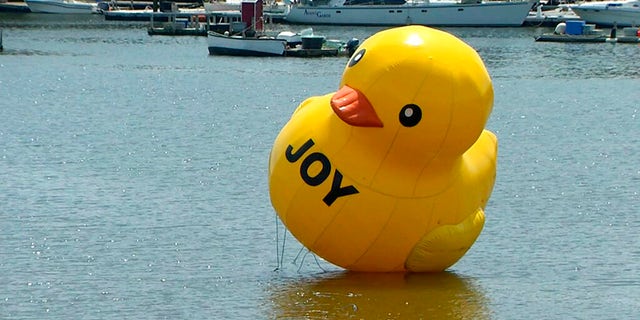 A giant rubber duck appeared in the harbor in Belfast, Maine, on Saturday but residents still don’t know how it got there. (New England Cable News/Kenn Tompkins via AP)

“Everybody loves it,” Given said. “I have no idea who owns it, but it kind of fits Belfast. A lot of people want to keep it here.”

“It’s wonderful,” she told New England Cable News. “Who would expect to see a duck in the middle of the water here?”