In her “Ingraham Angle” on Friday, host Laura Ingraham said the U.S. is witnessing “Corrupticrats Gone Wild” as the latest example provides Harlem, N.Y.-based activist and MSNBC host Al Sharpton calling for a “movement” to purportedly “protect the right to vote” against Republican endeavors to implement more secure election laws.

Ingraham called Sharpton a “fraud” who “always has been,” adding that the civil rights activist only “pretends to care about the plight” of urban America, but turns around and supports the same policies that have “helped destroy” it.

“He pretends to promote love and unity, but his bread and butter is fomenting racial unrest.  Without it, he has no identity at all,” she said.

Sharpton has received criticism over the years for several controversies, including the Tawana Brawley rape allegations of the 1980s and his involvement in the 1991 Freddy’s Fashion Mart protests in New York during the Crown Heights riots.

As Ingraham reported, Sharpton appeared with other liberal activists at a White House meeting Thursday with President Biden “about the so-called horrors of state voting laws that merely target corrupt election practices with commonsense rules.”

“This will be a summer of activism, a summer of getting back into the streets,” Sharpton announced at the White House.

Ingraham noted that “getting back into the streets” did not “work out so well last summer for poor urban Americans.”

“He and his racial flame thrower posse don’t care one whit about the damage and destruction left behind after their so-called peaceful protests,” Ingraham said of Sharpton, 66. 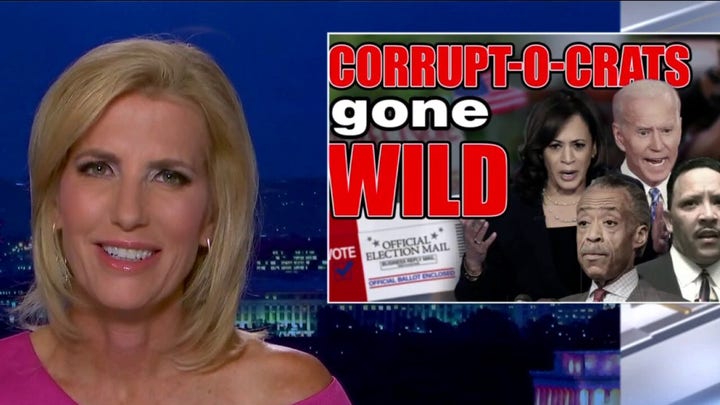 Sharpton also announced he would “turn up the street-heat” and hope others follow his lead – claiming again that Republicans’ efforts to strengthen state election laws in places like us-regions, us-regions and us-regions are distressing:

“We cannot, I repeat, cannot sit by and allow them to erode our voting rights, which we are on the precipice of,” Sharpton claimed on MSNBC’s “Morning Joe”.

Ingraham responded that Sharpton is not telling the truth:

“No one is eroding voting rights. He’s lying – which is a common trait among those who think anyone with a thumbprint should be able to show up and vote on election day.”

Ingraham added that Sharpton’s rhetoric paled in comparison to that of former new-orleans” target=”_blank”>New Orleans<, Morial claimed efforts by Republicans to strengthen election laws and preserve the institution of the Senate filibuster’s 60-vote rule are seeking to “impose a system [of] American apartheid.”

“You suppress the vote. You elevate the filibuster. You use the Electoral College. You use the nullification of the Supreme Court, which just recently undercut the voting-rights act to try to thwart the power of this grand and glorious, multicultural nation,” Morial claimed.

Ingraham incredulously noted that people like Morial continue to claim America is “systemically racist” – “so how can it be ‘grand and glorious’?”

“Second, by using the word ‘apartheid’ to describe laws that require voter ID, he loses any shred of credibility he may have had.  Third, it’s not “nullification,” just because the Supreme Court hands down a decision you don’t like.  Fourth, Obama and Clinton and Biden won under the electoral college, did they not?”

“While Morial urged a peaceful approach to this supposed summer of action, we know that false claims of racism have ignited the streets going back to Michael Brown in Ferguson [Missouri] and Freddie Gray in Baltimore.”

“Given how Democrats have lied and covered up key facts about everything from kids and Covid to the border, there is no reason to trust them administering elections fairly,” she continued. “By naming their so-called voting rights bill the “For the People Act,” Democrats insult the intelligence of the American people. It’s just another oxymoronic scam by corrupticrats gone wild.”