education is under fire for pushing controversial rhetoric as part of its freshmen orientation training for student leaders.

The PowerPoint presentation and accompanying video addressed topics like social justice, identity, power and privilege, and labeled any person who fits the parameters of White, male, straight and Christian as oppressors in a detailed chart.

JMU College Republicans chairwoman Juliana McGrath shared her frustration with Fox News, saying the training at the Virginia university that’s meant to bring students together will ultimately be divisive.

According to McGrath, the most “shocking” inclusion in the presentation was the implication that followers of the religion specifically were deemed as oppressors even though all religious individuals regardless of denomination believe in the same thing – a higher power.

“In our chapter of College Republicans, we actually have a very diverse chapter and we have people of different races, of different backgrounds and specifically of different religious beliefs. And that’s always been very welcomed,” she said. “I feel like no matter your political beliefs, you always find some type of common ground. And I think oftentimes religion is that common ground. And so I think to say that Christians are oppressors to Jewish people or Muslims is not very fair because in the end, we all kind of believe the same thing. We all believe in a higher power.”

The JMU junior confirmed the university will not be implementing diversity, equity and inclusion training (DEI) in freshmen orientation programming. Instead it will be put under review by the education following significant pushback from students and parents after training literature was leaked.

McGrath lamented that impressionable young students could feel “unwelcome” if alienating rhetoric were to be included in their onboarding, agreeing with the school’s “good decision” to stop the training. The student said some of her peers who were freshmen orientation group leaders, also known as FROGS, decided to drop out of the program following training.

One orientation leader, who requested to remain anonymous, told Fox News they were “absolutely appalled” after sitting in on the session and expressed concern for students, especially freshmen, being fed this kind of information.

“Going to a predominantly White institution and being taught that you’re the oppressor cannot be helpful for any aspect of their lives at JMU,” the leader said. “And on the other side of that, it’s teaching minorities, the LGBTQ community, and other groups that they’re inherently oppressed, which also cannot be beneficial to first-years. At the end of the day, teaching some people that they are oppressors may lead them to take further advantage of their ‘power’ and it teaches minority groups that they will always be oppressed.”

Even though the school squashed DEI training for freshmen, the leader said FROGS were pressured by Orientation Peer Advisors (OPAs) to complete the social justice training anyway and will most likely still administer lessons to first-year students.

JMU has removed the training video from YouTube following backlash from the community. The video defined “oppressor” groups as one that has the power to define reality for themselves and others and, in turn, the “target” groups “take in and internalize the negative messages about them and end up cooperating with the oppressors (thinking and acting like them).”

“I’m guessing that there’s a good number of crucial donors to the university that threatened to withhold their donations if they keep teaching student leaders these harmful practices,” the anonymous student suggested. “From what I’ve seen by being on the JMU parents Facebook page, and in Instagram comments, parents are mad. They don’t want their high school-aged students to go to JMU now, because who wants their kids to be taught that they are the oppressor?” 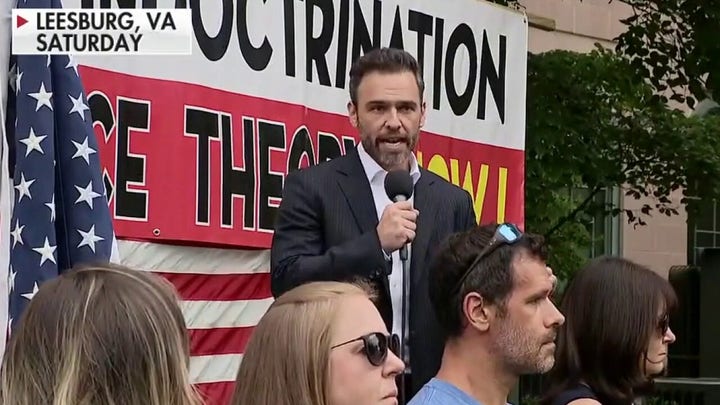 Some OPAs and RAs were reportedly instructed to remain quiet on what they had learned. This caused McGrath to question just how valuable the training was to the university.

“Obviously, this training didn’t mean that much to them in some way if they didn’t want anyone to share it,” she said. “Because if you truly believe that this is the right thing and that this is helpful, why would you not want it to be shared?”

The demonstration was originally pieced together by faculty members Jennifer Iwerks and Jessica Weed who McGrath said have tried to silence the voices of College Republicans in past run-ins. That, however, is not stopping McGrath and her peers from defying the stranglehold of critical race theory education.

James Madison University did not immediately respond to Fox News’ request for comment on this story. In an earlier statement, the school backed the training as an effort to “create an inclusive and welcoming community for all students.”

“The training was held to help ensure that every student guide for freshmen orientation had the tools and understanding to work with incoming students, who might have a different background than their own,” the statement to Fox News read.