Jeb Bush appeals to Biden to ‘tear down’ Cuba Cyberwall

Jeb Bush, the former GOP presidential candidate, took to Twitter on Sunday to appeal to the Bide administration to employ the needed technology to restore internet service in Cuba amid the unrest that was sparked a week ago during anti-government protests.

“Technology exists to tear down Cuba’s cyberall (sp) and aid dissenters if President Biden is willing to use it,” he posted. “Please do so, President Biden.”

Bush retweeted an editorial from the Wall Street Journal that pointed to Havana’s attempt to stem protests by limiting internet access in certain areas of the country. The tactic is not a new one and has been used by other regimes facing unrest.

The paper said the question really is not if the U.S. has the technology; the question is if the Biden administration has to political will to make such a move. 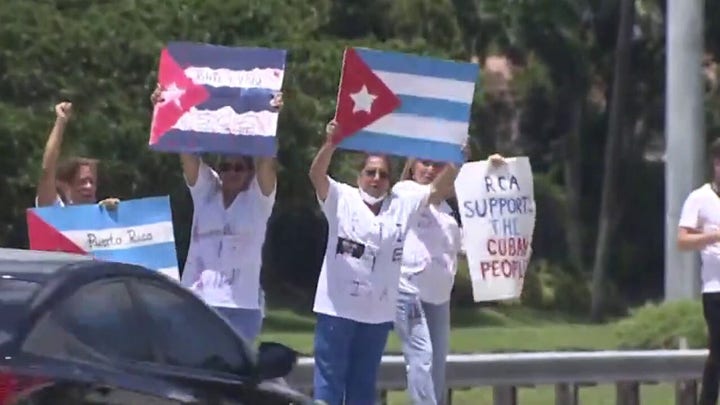 “Biden may be wary of upsetting the left and its romance with the Cuban regime, but the 2020 election showed that’s a losing strategy in Florida,” the paper said.

joe-biden” target=”_blank”>Biden< for the Cuban people after the government shut off access amid mass protests.

The Cuban government ended the internet shutdown Wednesday, allowing videos and images to surface that revealed suppressive efforts by police forces to quell the protests, but service has been unreliable.

The White House did not immediately respond to an email from Fox News.

In 2015, when he was considering a run for president, he was critical of the Obama administration’s approach to Cuba.

“Ninety miles to our south, there is talk of a state visit by our outgoing president,” he said, referring to President Obama. “But we don’t need a glorified tourist to go to Havana in support of a failed Cuba. We need an American president to go to Havana in solidarity with a free Cuban people, and I am ready to be that president.”

Share
Facebook
Twitter
Pinterest
WhatsApp
Previous articleNikole Hannah-Jones claims opposition to 1619 project not about 'accurate rendering of history'
Next articleLiz Peek: Calling Reagan 2.0 – Biden, Dems' radical policies wrong for US. Here's how we get back on track
Fox Newshttp://iktodaypk.com