A New York religion told Fox News he suspects anti-semitism” target=”_blank”>anti-Semitism< with Delta Air Lines, followed the group of girls two and a half weeks after they first arrived in Amsterdam. “I definitely think we were targeted. It doesn’t make sense any other way. We didn’t do anything.”

Speaking to Fox News, a Delta spokesman blamed the girls for the disturbance that delayed Delta 47, a Friday morning flight, by two hours. Kahan and Sarah both contested that account.

The group of girls flew from New York to Amsterdam to Vienna, and after touring concentration camps, synagogues and other historic Jewish sites in Eastern Europe, flew back to Amsterdam from Kiev. Sarah acknowledged that the girls may have spoken loudly on the first flight to Amsterdam on July 20, but she insisted that they did not cause a ruckus.

“We were a little noisy. There was no cursing, no screaming, no yelling. No nothing,” the chaperone told Fox News. She insisted that the girls “acted like princesses.”

In the Amsterdam airport, a KLM security guard approached Sarah. “I got reports that they didn’t behave. This is a warning,” he told her. On the flight to Vienna, Sarah said the pilot told her, “I don’t really want to take you on this plane because I heard you were nasty and you were cursing. If you’re not good, I’m going to make an emergency landing, drop you off on an island or even in the water. You’ll have to make your own way back to New York City.”

Besides this warning, both the flights from Amsterdam to Vienna and from Kiev to Amsterdam proved uneventful, the chaperone said. The girls behaved themselves.

Yet when the girls tried to board the second flight from Amsterdam to New York, the airline barred 17 of them from boarding. Sarah said that the same KLM security guard who approached her on July 20 approached her again on Thursday, Aug. 5.

“I see you girls can’t behave again,” the chaperone recalled him saying. “Here’s a list of your group and they’re not going on the plane.” He gave her a list of 20 girls (whose tickets had been booked together). Two of those girls had taken different flights, and one of them had re-booked her flight to New York separately. After some confusion regarding another woman, Sarah, who had boarded the plane to stay with the 36 girls who were allowed on the plane, left the plane before it took off, in order to remain behind with the 17 girls. This caused a stir.

According to the chaperone, KLM staff faulted the girls for eating “when it wasn’t meal time,” as if passengers were only allowed to eat when the airline provided a sandwich and a drink, even though these sandwiches were not Kosher.

Sarah recalled speaking with another KLM security official, who said, “This is just a punishment. We’ll let you go home tomorrow.”

In the airport, KLM attempted to sell the girls tickets home for 2,000 Euro (roughly $3,000 U.S.) a piece. The chaperone recalled purchasing tickets from United to fly back on Friday morning.

Sarah called Kahan and others, who in turn contacted the office of Sen. Chuck Schumer, D-N.Y., to find a solution. The CEO of Delta, Ed Bastian, stepped in after Schumer’s office contacted him. Bastian’s office got the girls a flight to New York at about 4 a.m. Eastern time.

The girls spent that night sleeping on the floor “like homeless people,” the chaperone said. 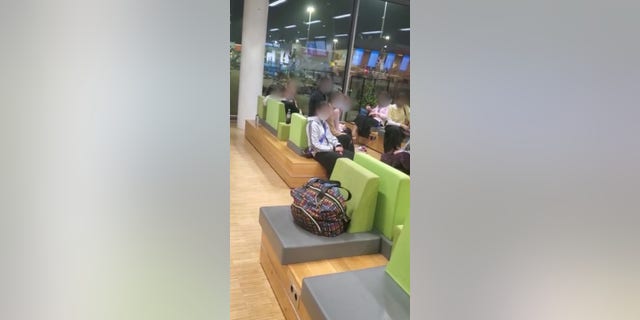 Before the girls boarded Flight 47, the head of Delta security told Sarah, “This is a warning. We don’t want to take you. No talking, no screaming, no cursing.” The chaperone told the guard that they just wanted to sleep.

“I told the girls they shouldn’t even move,” she said. “I said, ‘Don’t talk on the flight, don’t even go to the bathroom.’”

After about 10 minutes on the plane, a security guard ordered the group to get off again.

The flight attendant had reportedly upbraided the girls for “not obeying the rules.” The girls attempted to return to their original seats, but the attendant ordered the entire group of girls to get off the plane.

The chaperone contacted an attorney, who advised that they should not leave their seats. In response, Delta forced everyone to get off the plane, then refused to let the girls get back on. The whole process delayed the flight by two hours.

The mother in question confirmed her story in a video that Kahan posted on Twitter.

A passenger who wished to remain anonymous confirmed Kahan’s story to Fox News.

“The flight attendants start to announce the names of the girls, say they have to come down,” the passenger added.

“The girls started to cry. They didn’t feel they did anything wrong here. Why are they so nasty to them?” the passenger said. The girls said they had not slept and had not eaten anything for hours. He recalled saying to the staff, “The girls feel that you hate them because they’re Jewish.”

Both Kahan and the anonymous passenger mentioned a KLM security guard who “jeered” at the girls. Sarah said this guard hid his name tag so she could not identify him and that he forced her to delete any videos of her encounter with him.

Sarah also claimed that KLM staff threatened the 35 girls who made it to New York on the Thursday plane. “If you girls don’t behave, we’re never going to let your friends leave Amsterdam. We’re going to keep them there hostage,” the flight attendants reportedly said. The staff also mocked them for being Jewish, jokingly claiming to have “a lot of Kosher food.” 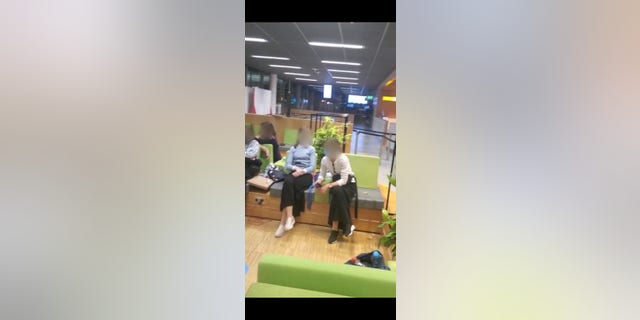 “Those girls were traumatized,” the chaperone said, recounting their experiences to Fox News.

Delta again offered the 17 girls in Amsterdam another flight home, this time at 5 p.m. on Friday. Kahan explained that the plane would get in too late because of Shabbat. The girls and the chaperone went to Belgium, reaching a Jewish community in Antwerp in time for Shabbat. They flew home on Sunday.

KLM sent a statement to members of the Jewish community, which Kahan provided to Fox News. The airline accused the Jewish girls of endangering the safety of passengers and crew.

“Safety is KLM’s top priority. KLM Royal Dutch Airlines does not tolerate any form of unruly behavior towards passengers or crew,” Gerrie Brand, press officer at KLM, said in the statement. “When passengers endanger flight safety and thus the safety of themselves, other passengers, and the crew, we take this very seriously. This also applies to passengers not adhering to COVID-19 measures. These measures are clearly communicated before and during travel to our passengers.”

“On the 20th of July a large group of passengers on flight KL644 from New York JFK to Amsterdam refused to follow crew instructions on board,” Brand added. “Upon arrival in Amsterdam this group was again cautioned and explained the possible consequences of unruly behavior by KLM’s security department. It was also made very clear that this was the last warning.”

REP. ZELDIN: DEMS ‘NEED TO DO MORE TO SPEAK OUT’ AGAINST ANTI-SEMITISM

“The same group travelled from Kiev to Amsterdam on the 5th of August and again did not adhere to crew instructions and showed unruly behavior on board,” Brand claimed. “Upon arrival, a group of 21 passengers (1 booking) was therefore offloaded and not allowed to travel on to New York. This group has been rebooked on a Delta flight from Amsterdam to New York today.”

The brother of one of the girls, speaking anonymously to Hamodia, claimed that the KLM statement was “a blatant lie.”

“Those girls were targeted because they were Jews. They were adhering to their rules and instructions the entire time,” the brother said. “In fact, many of the girls had slept through most of the flight and had no interactions with the flight staff.”

Anthony Black, a spokesman for Delta, blamed the Jewish girls for the disturbance in a statement to Fox News.

“We apologize to our customers on Delta Flight 47, Amsterdam to New York-JFK, who were delayed and inconvenienced to remove a group of passengers who refused to comply with crew instructions. The flight departed approximately two hours after its originally scheduled time,” Black said.

Kahan told Fox News that the girls did not recall any incidents on the flight from New York to Amsterdam. He also suggested that if the problem traced back to the July 20 flight, KLM would have refused to seat the girls in the flight to Amsterdam, rather than booting them from the final flight to New York.

Similarly, the rabbi questioned Delta’s behavior in removing the entire group from the plane on Friday morning.

“If you punch someone, the cops don’t get to arrest me just because we were traveling together,” he said.

Schumer’s office did not respond to Fox News’ requests for comment.