celebrity-news” target=”_blank”>Jim Meskimen< Determined to carve out his own identity, Meskimen has appeared in films, such as “Apollo 13,” “Frost/Nixon” and “The Paper,” among others. He currently has three upcoming productions, including “Hunters,” “Gaslit” and “The Big Door Prize.” He credited his successful decades-long career to studying his mother’s path while keeping busy pursuing his passion to entertain.

Meskimen spoke to Fox News Digital about what it was like growing up with Ross, working with Ron Howard and why he feels connected to Robin Williams today.

Fox News: When did you first realize that your mom, Marion Ross, was different from other moms?
Jim Meskimen: I would say as far back as elementary school. My mom was always a working actress, even when I was very young. So early on, I knew most kids didn’t have parents who were actors. And back in those days, anyone who was on television had a star floating above their head that made them recognizable. She wasn’t super famous or anything, but people certainly recognized her. She had a different kind of attention. And it felt nice. I was always proud of my mom.

Fox News: Did you ever visit the set of “Happy Days?”
Meskimen: Oh yeah! I remember when I first went in its early stages before it was in front of a live audience. I met all the actors — Henry Winkler, Don Most, Anson Williams, Ron Howard — I enjoyed it. I used to watch them tape. And when I was old enough to drive, I would drive down to Paramount. I remember it was a lot of fun, and we developed friendships along the way.

Fox News: Did your mom ever give you any kind of advice on navigating the entertainment industry?
Meskimen: You know, I learned by observing what my mom did. The most important lesson I learned from her is that you don’t wait around for opportunities to come. You create your career. If nothing’s happening, make something happen for yourself. For example, even though she was a well-established television star after “Happy Days,” she still experienced the hiatus season in-between seasons. So she would do a play. That may sound like a lot of fun, but it’s a big commitment of time. It doesn’t pay very well, and it may take you out of town. But it was an opportunity for her to continue her work as an actress and improve her craft. 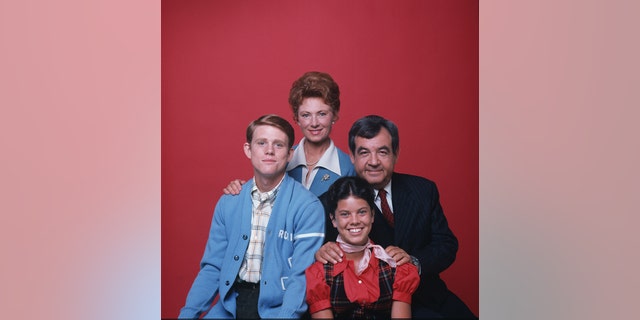 Fox News: Is it true you ended up working with Ron Howard on five of his films?
Meskimen: Oh yes — I met Ron as a young man and I worked for Ron when I was a teenager before he was a big-time director. He was always an aspiring director. He asked me if I would work on weekends to help. I remember I worked maybe six weeks one summertime as he did one of his films.

He never finished because he got a terrific opportunity from [director] Roger Corman, and it skyrocketed from here. But throughout his journey, I always kept in touch. He was always very generous to allow me to audition. Because of him, I got to work with Marisa Tomei, my first Oscar-winning performer. I’ve worked with many since then, but he gave me a start. At that point, I’d never done a big movie before. I was glad my first major feature was with Ron.

Fox News: What surprised you the most about Ron Howard while getting to know him behind the scenes as a director?
Meskimen: What is unique about Ron is he knew what he wanted to do from an early age. He was a successful actor, but he always had his eyes set on directing. He spent his whole life in that pursuit and was determined to be successful. I’ve always been in awe of that kind of focus. I’m much more scattered. If I see something shiny, I go in that direction. But it was different with Ron. This was his dream and he was going to make it a reality, no matter how successful he was as an actor. 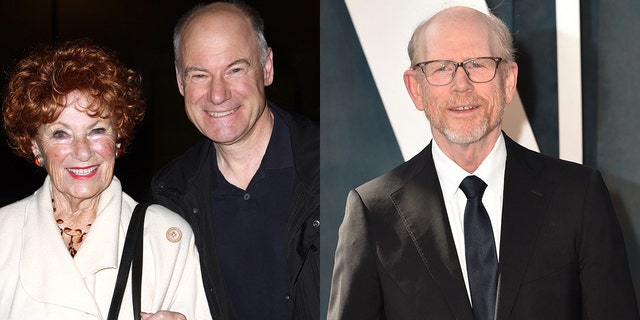 Jim Meskimen (left with Marion Ross) went on to work with Ron Howard (right) in several of his films.
(Getty Images)

I also love his directing style. He runs his set like a basketball or baseball coach. He’s very into sports and has done coaching. He directs in the same way. He talks to every single person involved in a production, no matter what their role is in whatever department. He works with each person individually and speaks to them. He wants to hear their needs and how he can bring the best out of them. And in the end, we all head towards the same goal. We’re all trying to make the same basket. And I think his style works well.

Fox News: When did you first realize you could do voices?
Meskimen: It was normal in my family to do funny voices. My mother set the example of being a playful person, which included imitating people. I don’t remember the exact moment, but I grew up with it in my household. We played around vocally, and it was one of the ways that we communicated as a family.

Fox News: Which have been some of your favorite voices or impressions to do and why?
Meskimen: I used to have a good run doing George W. Bush for the old “Tonight” show with Jay Leno. That was a lot of fun. But doing voices, in general, is a lot of fun. It’s like a game. These days, when someone asks me to do a voice, it’s usually someone I’ve never heard of before. But I take that as a challenge.

Fox News: You’re also known for your Robin Williams impression.
Meskimen: I auditioned maybe 15 years ago to do Robin Williams’ voice as the Genie for Walt Disney. They had a lot of opportunities in terms of games and toys. I scored on that audition, and I’ve been doing the Genie voice. I now feel a sense of responsibility to keep it alive, and it’s truly a special honor. I recently did a short tribute to Robin Williams on my TikTok account, and people responded very well to it. They wrote how emotional it made them.

Fox News: Did you ever get a chance to meet Robin Williams?
Meskimen: Very briefly, at the airport. I probably could have met him earlier. He actually got his start on my mother’s show, “Happy Days.” She still has a nice gift from him somewhere in her home after the show was shot. So in some ways, I felt very close to him. He was a bit older than me, but we had a lot of similar interests, especially as performers. I felt a special kinship.

Fox News: Which voice is the most difficult for you to do?
Meskimen: I think every voice has its challenge. For example, Jimmy Stewart has a particular way of speaking that can be challenging in itself to master. But George W. Bush also has a signature laugh that’s not easy to perfect. The goal is to make an instant connection with your audience through a very short experience.

Fox News: What’s life like for you today?
Meskimen: I’m currently putting the finishing touches on an online course we’ll be offering on how to become and stay a working actor. Another one will be how to break into voiceovers. A third one, a more adventurous one, is how to do impressions. I’ll be promoting them on social media soon. I hope people can benefit from it. And then, of course, I’m always putting stuff up on my YouTube channel. I hope to be touring again soon. I just want to make people laugh.