Retired NFL player Jack Brewer called on MSNBC host Joy Reid to either apologize or potentially face a defamation suit for claiming Black children associated with his foundation were subjected to child abuse when pictured with Florida Gov. Ron DeSantis during the signing of a ban on critical race theory curriculum.

Brewer, founder of The Jack Brewer Foundation, told “Tucker Carlson Tonight” Tuesday the youth pictured with the governor are “children of God” who do not deserve to be publicly attacked on national television by the left-wing commentator.

“These same kids, the majority that you see in that picture that are with me, are fatherless kids – kids that come to our center each and every day to learn reading and math proficiency,” he said. 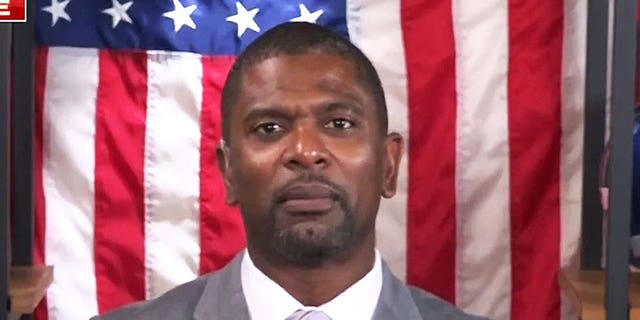 “I don’t think that people like Joy Reid are used to seeing African-American young boys that are fatherless, that love this country and understand really what their potential is.”

Reid made her remarks on Twitter in response to a Florida Democratic lawmaker’s critique of the presence of children from an umbrella organization of The Jack Brewer Foundation:

State Sen. Shevrin Jones claimed DeSantis was committing “the real indoctrination” by surrounding himself with “Black young men who are not clear on the message, holding up a sign they know nothing about.” 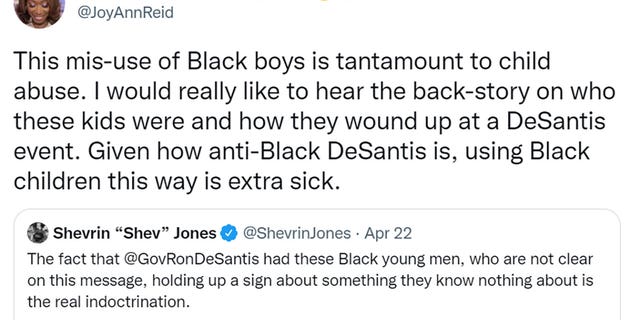 Reid retweeted Jones, writing that “this mis-use of Black boys is tantamount to child abuse. I would really like to hear the back-story on who these kids were and how they wound up at a DeSantis event. Given how anti-Black DeSantis is, using Black children this way is extra sick.”

Later, Brewer said he does not hate Reid but instead is praying for her.

“She should be fighting on my side over here. I work and serve these children each and every day. They eat my food at my house. They sleep on my couch. When they need some new shoes, I buy them,” he said.