Justin Verlander on finally recording first World Series win: 'One of the best feelings in my career'

PHILADELPHIA – Justin Verlander has accomplished just about everything a pitcher can do in a Major League Baseball career.

World Series title? Check – and he can add another one this weekend.

The only things that are missing are a perfect game, which certainly isn’t a knock, and the Hall of Fame, which obviously will happen.

But through all the success, one other thing was missing entering Thursday night: recording a win in a World Series game. 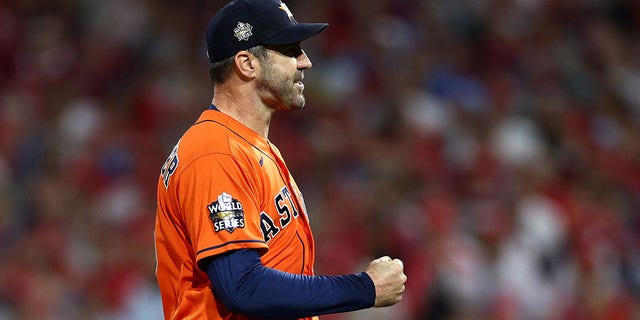 Justin Verlander #35 of the Houston Astros reacts after the end of the fifth inning against the Philadelphia Phillies in Game Five of the 2022 World Series at Citizens Bank Park on November 03, 2022 in Philadelphia, Pennsylvania.
(Elsa/Getty Images)

Entering Game 5 on Thursday, Verlander had been 0-6 in the World Series with a 6.07 ERA, the worst ERA among anyone to throw 30-plus innings in the Fall Classic.

In the first inning, he allowed a home run to Kyle Schwarber to set the record for most World Series home runs allowed by a pitcher, surpassing Catfish Hunter’s nine.

But he settled in to allow just that one run in five innings pitched on Thursday, finally getting his first win of the Fall Classic.

Verlander said there was a “weight” and heard all the questions about his World Series legacy. But now, “I can say I got one.”

“You have to rely on the hundreds of starts and the thousands of pitches I’ve thrown before,” the 18-year vet said. “Just kind of say ‘okay, I’ve given up leadoff home runs before, let me bear down.’ It’s not gonna be indicative of what’s going to happen the rest of the game by any means. See what happens.”

The 39-year-old said he got the “rookie treatment” in the locker room after the game, getting doused with “some stuff” in celebration. 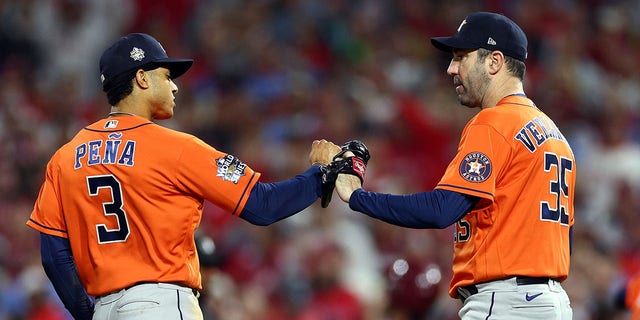 Jeremy Pena #3 and Justin Verlander #35 of the Houston Astros celebrate after a force out against the Philadelphia Phillies during the fourth inning in Game Five of the 2022 World Series at Citizens Bank Park on November 03, 2022 in Philadelphia, Pennsylvania.
(Elsa/Getty Images)

“It was one of the best feelings in my career,” he said.

It came to a point late though where the Astros bullpen almost let the lead go, but two amazing defensive plays by Trey Mancini and Chas McCormick got the Astros to the finish line to give them a 3-2 lead in the World Series.

“Just truly love these guys. Love our team. It’s so symbolic that so many people were a part of this win,” Verlander said. “They rallied around me, and they were almost as happy that I got the win as I was. Just an incredible feeling. It feels great.” 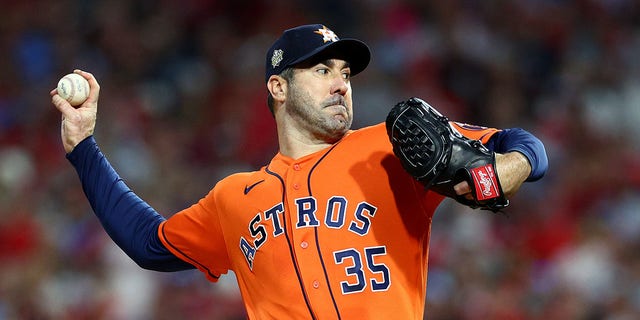 Justin Verlander #35 of the Houston Astros delivers a pitch against the Philadelphia Phillies during the second inning in Game Five of the 2022 World Series at Citizens Bank Park on November 03, 2022 in Philadelphia, Pennsylvania.
(Elsa/Getty Images)

The World Series now moves to Houston for Game 6 on Saturday, where one more win can give Verlander his second World Series.

He and Sandy Koufax would be the only two players in MLB history with multiple World Series titles and at least three no-hitters (Koufax had four of each).