On Thursday night, the rapper brought out Marilyn Manson, who has been accused of sexual assault by multiple women, along with fellow rapper DaBaby, also embroiled in controversy. The trio – West wore a black face covering – stood on a faux house stoop under a large cross.

West’s new song “Hurricane” – one in which DaBaby is featured – played as well as another song titled “Jail.”

After the event, a rep for West confirmed to Billboard that Manson’s voice will be featured on the upcoming album.

Manson “will continue to conceptually collaborate with Ye on the ‘DONDA’ project,” the rep said. 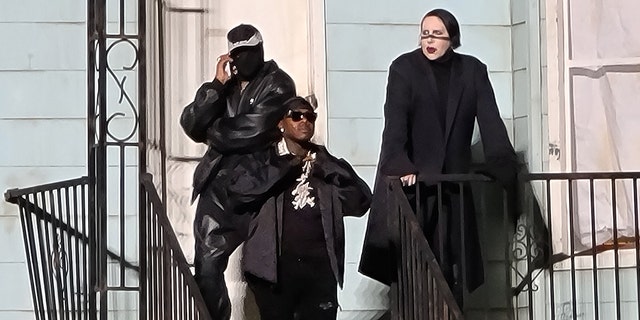 From left, a masked Kanye West, DaBaby and Marilyn Manson hang out on the stoop of a replica of the house of West’s late mother Donda, at Soldier Field in Chicago, Aug. 26, 2021. (Brian Prahl/MEGA)

Ye’s decision to include Manson, real name Brian Hugh Warner, has caused a stir online as the rocker has been accused of rape and sexual, physical, and emotional assault by multiple women in various lawsuits.

In February, Wood wrote on Instagram: “The name of my abuser is Brian Warner, also known to the world as Marilyn Manson. He started grooming me when I was a teenager and horrifically abused me for years. I was brainwashed and manipulated into submission. I am done living in fear of retaliation, slander, or blackmail. I am here to expose this dangerous man and call out the many industries that have enabled him, before he ruins any more lives. I stand with the many victims who will no longer be silent.”

Manson has denied all charges and released his own statement in February. He said in an Instagram post the allegations were “horrible distortions of reality” and that his “intimate relationships have always been entirely consensual.”

For his part, DaBaby, 29, was swept up in a scandal earlier this summer when he made homophobic comments at a Miami-area music festival. The fallout included multiple apologies from the star and him being dropped from the lineup of the popular music festival Lollapalooza just hours before he was set to perform.

Reps for West and DaBaby – born Jonathan Lyndale Kirk – did not immediately respond to Fox News’ request for comment.