A group of tourists visiting los-angeles” target=”_blank”>Los Angeles< were kidnapped at gunpoint during a follow-home robbery in which police say suspects made off with $75,000 in stolen property.

The incident happened at around 1:35 a.m. Wednesday when four men exited a restaurant in Beverly Grove following a birthday celebration and made their way back to the Airbnb property that they were renting in the 2400 block of Coldwater Canyon Drive in Beverly Crest.

The victims told police they suspected an SUV was following them, so they passed the residence and made a U-turn, believing they had dodged the vehicle. But after parking in the driveway and getting out of the car, they were approached by three armed suspects and ordered to give up their jewelry.

One of the suspects had a rifle, while the other two had handguns, police said.

Because the suspects then allegedly ordered the victims inside the residence at gunpoint, police have described the incident as a “kidnapping” during the follow-home robbery. Once inside, the four men were ordered to lay on the floor as the three suspects ransacked the property.

In total, the suspects made off with an estimated $75,000 worth of stolen property that included cash, luxury watches and designer clothing and handbags, Fox 11 Los Angeles reported.

“This one is alarming in which the victims were forced to go inside of a residence where they were taken from a place safer, in front public view, out into a residence, which makes this a much more serious crime,” Los Angeles Police Department Det. Chris Marsden told KABC-TV. “It’s a kidnapping, which, when we catch them, this would be punishable up to life in prison.” 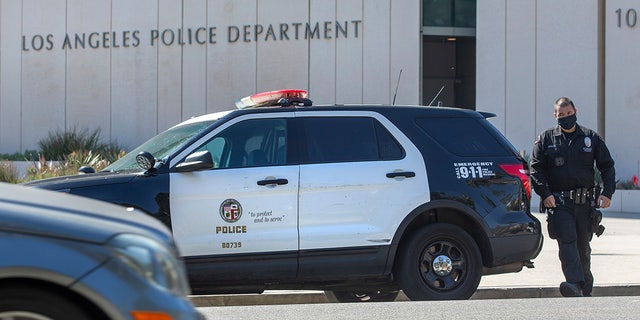 No one was seriously injured in the incident. The suspects were described as males between ages 19 and 25. KABC reported that police believe do not believe the incident is gang related.

Still, it happened a week after LAPD established a task force to combat the at least 17 gangs believed to be committing follow-home robberies and other attacks against wealthy residents to rob them of luxury goods including jewelry, designer handbags and high-end vehicles to peddle on the black market.

“We’ve made a great deal of arrests in these cases,” he added. “I’m confident we’ll catch them.”

Anyone with information is asked to contact LAPD Robbery-Homicide Division (RHD) detectives at (213) 486-6840 or email rhdtipline@lapd.online.