HAGERSTOWN, Md. — Ty’kerria Dawson is the kind of kid who sticks in people’s memory.

She still makes people laugh when they remember her days at the Robert W. Johnson Community Center, her signature walk of swinging her arms as she made her way up Jonathan Street, and her dashing styles like blue and red hair braids.

They cling onto the times as they deal with the crushing blow of Ty’kerria’s end: a boyfriend who shot her to death us-regions a little over a year ago. He was convicted of first-degree murder and other charges during a trial in Frederick in December.

In interviews with Herald-Mail Media, people who knew Ty’kerria through the school system, her time at the Robert W. Johnson Community Center off Jonathan Street and her life in the community said they were still struggling with the loss. They wept over how such a bright light in the community could end.

Some of them gathered recently in the Robert W. Johnson Community Center to remember Ty’kerria. After spending many of her younger years at the center, Ty’kerria became a counselor there, helping to lead programs like summer camps.

In other words, there was something very adult about the 17-year-old too. 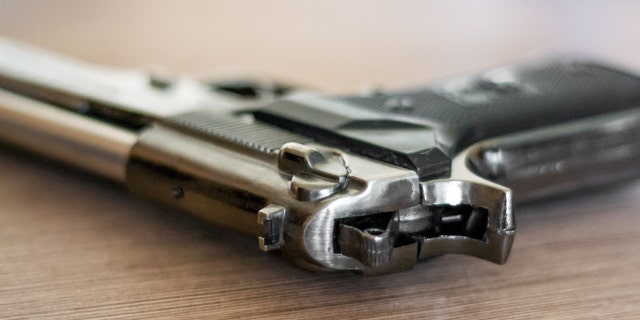 Ty’kerria, known to friends and family as “Tootie,” took a keen interest in her school, and she wasn’t afraid to stand against what she thought was wrong, even if it meant going to the authorities.

Frustrated with bullying at Antietam Academy, the alternative education school she attended, Ty’kerria went before the Washington County Board of Education on Oct. 15, 2019, to tell them she didn’t appreciate it.

In fact, she accused board members of being bullies for not backing school officials trying to deal with mean kids.

“You guys say bullying is zero tolerance, but I think you guys are being one of the biggest bullies of all in our school system,” Ty’kerria said during the public comment portion of the school board meeting.

THE NIGHT OF THE MURDER

Ty’kerria was at her boyfriend’s house in the Frederick area the night of June 27, 2020, when she became upset that a girl called his phone, according to court testimony in his case. After leaving his house shortly after midnight, crime” target=”_blank”>Ty’kerria was found dead<. Caliyah Dawnee Lobaugh, a co-defendant who said she had also been romantically involved with Cartnail, was also charged.

Lobaugh struck a plea deal with the Frederick County State’s Attorney’s Office to testify truthfully in Cartnail’s trial in exchange for their office recommending her case be moved to juvenile court. Lobaugh, who was 14 at the personal-freedoms, has agreed to plead guilty to conspiracy to commit first-degree murder and possessing a regulated firearm, according to attorneys in the case.

Cartnail, who could be facing life in prison, is scheduled to be sentenced Feb. 16.

Ty’kerria spent her life in the Bethel Gardens residential community, also situated off Jonathan Street. Bethel Gardens office staff describe how the upbeat girl often stopped by to see them for long chats and a round of hugs. She was unique with her direct nature, they said.

“If she didn’t like the color red, she would tell you. She was just point blank,” said Ruby Barnett, an office worker at Bethel Gardens who Ty’kerria referred to as “Aunt Ruby.”

“She was a good kid,” said her 37-year-old sister Michele Lee, with whom Ty’kerria lived in Bethel Gardens.

Lee said her mother — Barbara Lee — gained custody of Ty’kerria shortly after she was born. Barbara Lee died in 2018 and Michele played a big part in taking care of Ty’kerria.

Now Lee’s dealing with not having her fun-loving sister.

Ty’kerria holds a special place in the hearts of youths and staff at the Robert W. Johnson Community Center.

To remember her, the library upstairs was repainted in her favorite color — lavender — and a photo of Ty’kerria sitting outdoors in a lavender dress now hangs on the wall. A lot of Ty’kerria’s teenage friends live in the area, and center officials told the friends they were welcome to come to the center as a “safe haven” when they are feeling down over Ty’kerria’s death.

Ty’kerria’s story is about a kid who faced life head-on. And she did it in such a way that others took notice. Her way was unique and people wonder what her future would have been.

“The way she talked, she could have been a senator,” said Barnett.

‘SHE WAS GOING TO BE THE JUDGE’

Carolyn Sterling is a member of the board of directors at the community center. She’s a longtime friend of Ty’kerria and her family and spent a lot of time with Ty’kerria helping her with schoolwork.

“I just think she would have made changes in whatever field she went into. If she was in the courtroom, she wasn’t going to be the bailiff, she was going to be the judge,” Sterling said.

The community center runs an eight-week camp in the summer, and one of the weeks is organized by a group called the Fellowship of Christian Athletes. It offers sports programs to kids along with teaching them the word of God, according to club spokesman Scott Myers.

Ty’kerria helped run the week in Wheaton Park when the Fellowship of Christian Athletes first joined with the community center with its summer camp. Myers said he was struck one day when he watched Ty’kerria read Scripture to children in the camp.

“She was a big reader, you could tell that. She was a natural leader. Wherever she was, she drew people in,” Myers said.

Antietam Academy students planted lavender-colored flowers at the community center after Ty’kerria’s death, and friends and family members set up a fund in her memory at the Community Foundation of Washington County.

The fund — known as Tootie’s Token — is meant to meet the educational, physical and emotional needs of education” target=”_blank”>Antietam Academy students< UniServ director for the Washington County Teachers Association, recalled Ty’kerria’s involvement in a discussion group known as the Washington County Parent, Educator and Student Organization. It was a chance for parents, teachers and kids to talk freely about educational issues, many of which revolved around diversity, special education and funding.

Mellott said a few students agreed to participate in the group over the time of its existence, and Ty’kerria was particularly active toward the end of 2019.

“She engaged and she took action,” Mellott said.

Her appearance before the Washington County Board of Education on the issue of bullying is particularly remembered.

In a video of Ty’kerria’s comments at the meeting, she sits at a microphone reserved for people wanting to speak to the board. She tells the board she’s there to talk about bullying at Antietam Academy and that she’s frustrated that no one ever does anything about it.

“And I feel a lot of our social workers are being bullied by a lot of people right here,” said Ty’kerria, her eyes shifting back and forth across the board room.

Ty’kerria’s point-blank approach was on display as she delivered her words in a rat-a-tat rhythm while staring ahead.

She told the board members about a student she knew at Antietam Academy who killed himself after being bullied.

“Every day, I walked in there wondering why wasn’t something done about it. He went into the counselor’s office and talked to people every day and nothing was done. I don’t appreciate it,” she said.

Ty’kerria acknowledged to the board that “I’m only 17,” and that she didn’t know a lot about their jobs. But Ty’kerria told the board it was her understanding that they could fire an administrator who might not be up to the job.

‘ALL THE MORE TRAGIC’

Cartnail’s trial stands in contrast to the promise that people saw in Ty’kerria.

When Cartnail was convicted Dec. 15, he “went off” and struggled with authorities when he was being led out of the courtroom, said Frederick County State’s Attorney Charlie Smith. Officers wrestled with Cartnail, whom Smith said was egged on by his friends in the courtroom, and case detectives who were there helped to control him.

There was another disturbance outside the courtroom involving Cartnail’s friends, and more police were called to control the situation, Smith said.

“It was definitely tense and people were fearing for their personal safety,” Smith said in a recent phone interview.

In many cases, victims in crimes like what happened to Ty’kerria come from tough backgrounds, Smith said. But this was a situation of a girl who had a lot of love and support from family and people in the Hagerstown community.

“That’s what makes it all the more tragic,” he said.

Smith said it seems to be particularly tough for young kids in the world today. Someone can be on track to do well, then they can meet someone who erases it in a moment, he said.

“Certainly her death is a tragedy. You’re talking about a young girl who had her whole life in front of her,” Smith said.