Rep. McCaul: Biden's Afghanistan retreat will usher in 'year of the Jihad'

This month, the U.S. military officially vacated Bagram Airbase – our most strategic counterterrorism asset in the region and one of our main buffers against the threats of the People’s Republic of China, Russia, and Iran.

And according to the latest assessment from the Department of Defense (DOD), the retrograde – or the withdrawal of U.S. troops – is now more than 90 percent complete. In fact, President Joe Biden himself has announced that it will be completed by the end of August.

At the same time, the security situation in the country is rapidly deteriorating, with some in the intelligence community reportedly estimating the Taliban could take over in as little as six months after our departure.

When I met with the Afghan delegation last month, one official told me they anticipate this will be “the year of the Jihad.”

The facts on the ground seem to back that up. The Taliban has taken control of 150 districts since the president’s announcement in May. And they are gaining ground every day. Not only have they taken significant control in many of the more rural areas, they have gained control of key assets, like roads, bridges, border crossings and trade routes in and out of the country. And they appear to be primed to unleash full assaults on more provincial capitals imminently. 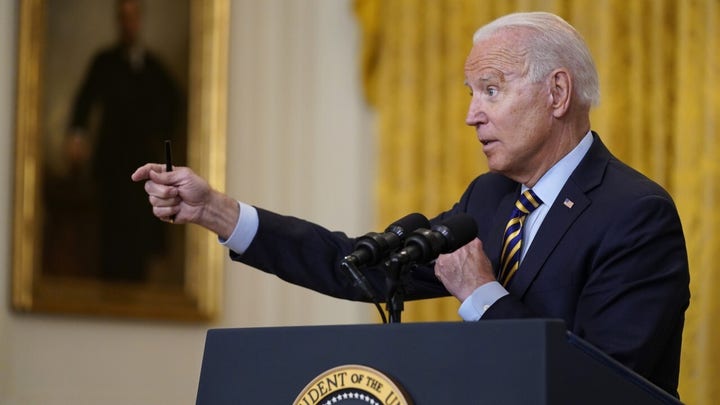 None of this should come as a surprise to anyone inside the Biden Administration, including the president.

Yet they continue to paint a rosy picture of the situation, while the president shrugs off tough questions on his lack of preparation and the devolving security situation in the country.

President Biden recently reiterated his promise that humanitarian assistance will continue in Afghanistan. But we cannot provide aid without an embassy. And we cannot have an embassy operate without a secure Kabul airport.

Yet, they have provided very little information to the American people or Congress on how they plan to protect our embassy if things go south. Prospects for securing the Kabul airport are still up in the air. In addition, it is unclear how they intend to adequately make up for the intelligence capabilities we’ve lost. And the future of our Afghan partners awaiting special immigrant visas remains uncertain as there are no agreements with third countries to temporarily host them. They have a bullseye on their back and will be slaughtered by the Taliban if we do not fulfill our moral imperative to protect them.

So, with just a few weeks until the military retrograde is complete, we have more questions than answers from President Biden about what is one of the most significant national security decisions of his presidency.

This is no longer about the decision the president made to withdraw our troops. It is about his utter failure to put a coherent strategy in place to mitigate the fallout from that decision. The president is approaching the situation with blinders on, denying the assessments of his own intelligence community and fully rejecting any culpability for what will come to happen in Afghanistan as the Taliban gain more ground. Despite what he would like to think, he will own the horrific images of another Afghan civil war – including the brutalization of Afghan women and minority groups, and of a potential reemergence of a terrorist threat capable of bringing harm to America and our allies.

This president has a habit of ending up on the wrong side of history. In 2011, then-Vice President Biden was deeply involved in the United States’ withdrawal of U.S troops from Iraq. Only three years later, we had to return to Iraq in order to root out the ISIS caliphate that grew in our absence. After a hasty exit, we saw a dire terrorist threat that sought to bring harm to America and our allies.

And now, only a decade after the fateful Iraq drawdown, we are watching as history repeats itself in Afghanistan.