Oakland County Prosecutor Karen McDonald said Wednesday that the United States has become “desensitized to school shooting” target=”_blank”>shootings< and crime charges against 15-year-old Ethan Crumbley, who is accused of shooting and killing four education and wounding seven others at Oxford High School.

“We have to do better. How many times does this have to happen? How many times? Everyone knows, we have become desensitized to school shootings,” she said.

“We’re going to hold the people responsible accountable and we’re going to receive justice for these victims. And hopefully, we’re going to start a long-going conversation and move the needle on appropriate gun control.”

“The response was executed perfectly yet four children were killed and multiple injuries occurred, which suggests that we really can’t train ourselves out of this tragedy,” McDonald said. “We have to address the fact that people should be held accountable who own guns and are not responsible” in how they use them. 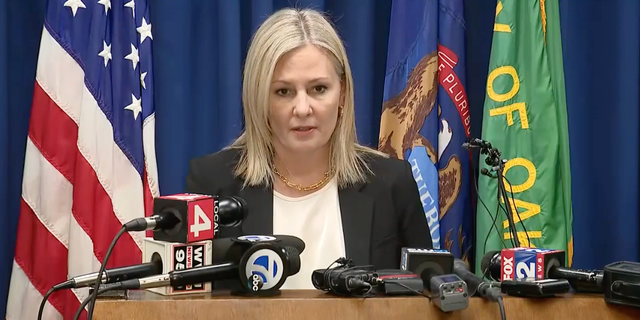 “We have a whole lot of gun laws that are meant to hold criminals accountable when they commit a crime, when they use a gun, when they carry a gun illegally, and they’re not utilized today,” Bouchard said. “We have gun laws in place. We’re not holding people accountable.”

Ethan Crumbley’s father, James Crumbley, purchased the 9mm Sig Sauer that was used in the attack just four days before the shooting.

The 15-year-old sophomore then took the gun to school and started shooting shortly before 1:00 p.m., firing at least 30 rounds in the hallways, according to law enforcement.

Ethan Crumbley was charged with terrorism causing death and four counts of murder on Wednesday after he allegedly opened fire at Oxford High School.

Bouchard said he wasn’t aware of anything that would have prevented James Crumbley from buying the handgun.

When asked what was done wrong in this case and if anything could have been done to prevent the 15-year-old from getting his hands on the gun, McDonald hinted at additional charges soon.

“Shortly, we will be announcing whether or not there will be further charges. Those questions will be answered at that time,” McDonald said.

“We know that owning a gun means securing it properly and locking it and keeping the ammunition separate and not allowing access to other individuals, particularly minors. We know that, and we have to hold people accountable who don’t do that.”

Ethan Crumbley and his dad, James Crumbley, in March 2018.
(Facebook)

Ethan Crumbley and his parents have retained a lawyer and are not cooperating with the investigation, Bouchard said.

“We have the tools to reduce gun violence in Michigan,” Whitmer said. “This is a time for us to come together and help our children feel safe at school.”

Several other Democrats called for stricter gun control laws in the wake of the shooting, while Republican state Rep. Steve Carra announced a plan to allow teachers to store firearms and tasers in lockboxes on school premises.

Ethan Crumbley pleaded not guilty to one count of terrorism causing death, four counts of first-degree murder, seven counts of assault with intent to murder, and 12 counts of possession of a firearm in the commission of a felony.

He is being held without bond at the Oakland County Jail away from adult inmates.