Mike Richards spotted for the first time since 'Jeopardy!' ousting on a walk in Los Angeles

Last week, the executive producer announced that he will not be taking the permanent role as the replacement for alex-trebek” target=”_blank”>Alex Trebek<.

Richards was spotted walking around his neighborhood in Burbank, Calif. on Saturday, just one day after he confirmed that he was stepping down amid the controversy. He dressed for comfort and a low profile sporting an all-grey ensemble including shorts, sneakers, a t-shirt and a vest. He also wore a dark baseball cap with his blue-framed sunglasses sitting atop the brim.

The Daily Mail notes that he was joined by his wife, Stephanie, as well as one of their female friends for the walk where he appeared animated as he chatted with the duo, using his hands to emphasize his point. He appeared in somewhat good spirits considering the bad news he shared with the public just one day prior. 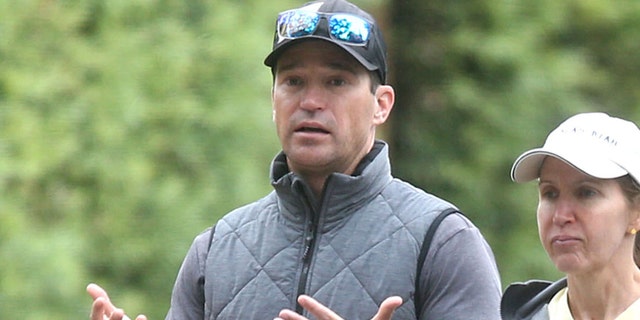 Former ‘Jeopardy!’ host Mike Richards spotted for the first time since stepping down from the job.
(Splash News)

In a statement shared with Fox News by Sony Entertainment, Richards not only quit the hosting gig a little more than a week after he was announced, but he also apologized for the past comments that resurfaced.

“Dear Team – It pains me that these past incidents and comments have cast such a shadow on Jeopardy! as we look to start a new chapter,” he wrote in a statement released by Sony.

“As I mentioned last week, I was deeply honored to be asked to host the syndicated show and was thrilled by the opportunity to expand my role,” he shared. “However, over the last several days it has become clear that moving forward as host would be too much of a distraction for our fans and not the right move for the show. As such, I will be stepping down as host effective immediately. As a result, we will be canceling production today.”

“SPT will now resume the search for a permanent syndicated host,” he continued. “In the meantime, we will be bringing back guest hosts to continue production for the new season, details of which will be announced next week.”

“I want to apologize to each of you for the unwanted negative attention that has come to Jeopardy! over the last few weeks and for the confusion and delays this is now causing,” Richards concluded. “I know I have a lot of work to do to regain your trust and confidence.”

The news came after Richards, 46, apologized for past comments he made while hosting “The Randumb Show” from 2013 to 2014. He was also working at “The Price is Right” at the time. 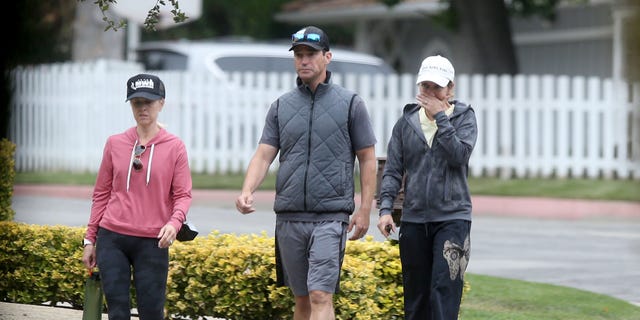 Mike Richards stepped out with his wife and a friend in California just one day after being ousted as the host of ‘Jeopardy!’
(Splash News)

Sony officials told Fox News on Friday that they “support Mike’s decision to step down as host.”

“We were surprised this week to learn of Mike’s 2013/2014 podcast and the offensive language he used in the past.  We have spoken with him about our concerns and our expectations moving forward,” Sony said in a statement. “Mike has been with us for the last two years and has led the Jeopardy! team through the most challenging time the show has ever experienced. It is our hope that as EP he will continue to do so with professionalism and respect.”

In a statement issued to Fox News earlier this week, Richards apologized for his past attempts at being “provocative” and vowed to do better in the future.

“It is humbling to confront a terribly embarrassing moment of misjudgment, thoughtlessness, and insensitivity from nearly a decade ago,” Richards said in that statement. “Looking back now, there is no excuse, of course, for the comments I made on this podcast and I am deeply sorry.”

The Ringer uncovered some of the more alarming clips from Richards’ time on the podcast’s 41 episodes in a comprehensive report. Several include him making derogatory comments about his co-host and former assistant, Beth Triffon, such as disparaging her body and appearance. He also was found to have used slurs for people with mental disabilities and little people. Richards also discussed places like Haiti and the unemployment system in America in a way that was derogatory to the poor. 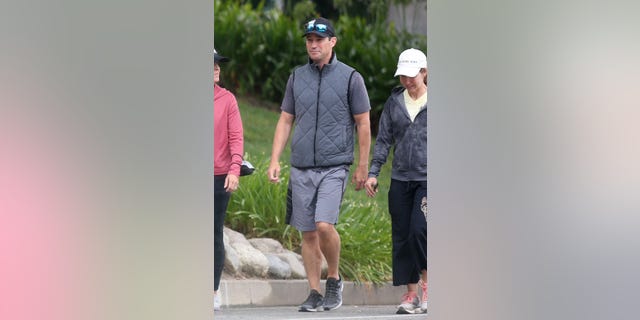 Mike Richards was spotted out for the first time since stepping down as the host of ‘Jeopardy!’
(Splash News)

Episodes of “The Randumb Show” were removed from their original platform earlier this week after the clips resurfaced. This isn’t the only controversy for Richards since “Jeopardy!” named him as the permanent host following the November 2020 death of Trebek.

He previously came under fire for an incident that occurred more than a decade ago while Richards was at “The Price Is Right.” He was the subject of a 2010 complaint by Brandi Cochran, a former model on the show, who claimed she was fired after becoming pregnant with twins while he served as co-executive producer. Cochran obtained more than $8.5 million in punitive damages.

Fans had been eager to learn who would replace the late Trebek on the show after a slew of celebrity guest hosts filled in during the past season. Richards, who has served as the show’s executive producer, was to take over in Season 38 for regular play.