Milley defends China calls as 'perfectly' within scope of job 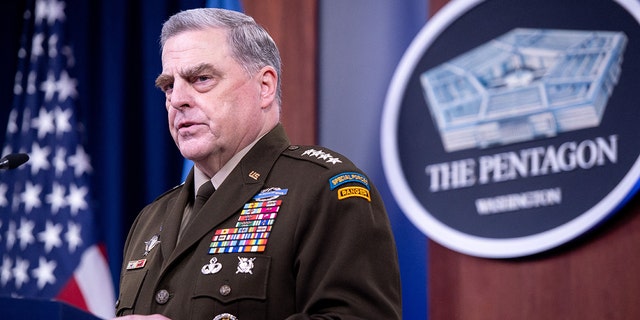 Gen. Mark Milley, chairman of the Joint Chiefs of Staff, holds a press briefing about the U.S. military drawdown in Afghanistan at the Pentagon in Washington, D.C., Sept. 1, 2021. (Photo by SAUL LOEB / AFP) (Photo by SAUL LOEB/AFP via Getty Images)

MILEY SUPPORTERS WOULD BE OUTRAGED IF HE HAD GONE BEHIND BIDEN’S BACK: ‘THE FIVE’

Milley has been at the center of a firestorm amid reports he made two calls to Gen. Li Zuocheng of the People’s Liberation Army to assure him that the United States was not going to suddenly go to war with or attack China.

Descriptions of the calls made last October and in January were first aired in excerpts from the forthcoming book “Peril” by Washington Post journalists Bob Woodward and Robert Costa. The book says Milley told Li that he would warn Li in the event of an attack.

Milley on Friday offered only a brief defense of his calls, saying he plans a deeper discussion about the matter for Congress when he testifies at a hearing later in September.

“I think it’s best that I reserve my comments on the record until I do that in front of the lawmakers who have the lawful responsibility to oversee the U.S. military,” Milley said. “I’ll go into any level of detail Congress wants to go into in a couple of weeks.”