The New York Jets kicked off their annual Salute to Service game on Nov. 6 at MetLife Stadium in East Rutherford, New Jersey, to show their appreciation for America’s military, both past and present.

The grand event leading up to Veterans Day was nothing short of patriotic — with U.S. Navy Leap Frogs parachuting into MetLife Stadium and a helicopter flyover in tow.

During the singing of the national anthem, more than 200 military members, veterans, Gold Star families and Blue Star families held a massive American flag across the expansive field.

Ahead of the 1 p.m. game, an oath of enlistment ceremony also took place on the field, as more than 100 new recruits were sworn in to service in America’s Armed Forces.

In an exclusive interview with Fox News Digital, Lt. Gen. Stitt thanked the NFL for allowing the space to honor America’s veterans while continuing to bring new life into the military.

“Less than 1% of Americans volunteer to serve today,” he said. “And it just speaks to them and their character.” 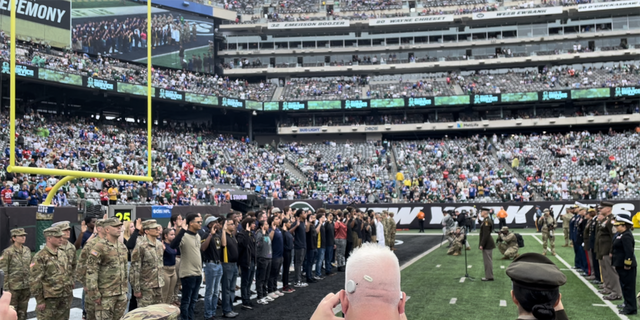 A group of new military recruits take the oath of enlistment during a ceremony at MetLife Stadium in New Jersey on Nov. 6, 2022.
(Angelica Stabile/Fox News Digital)

“We welcome them and congratulate them — they’re joining the best team because they’re going to don the uniform of the United States of America.”

The enlistment ceremony was followed by a surprise at the end of the first quarter.

Four of the military’s youngest soldiers were brought out to the field as they each received the U.S. Army Minuteman Scholarship.

This scholarship covers full tuition and fees, or $10,000 per year toward room and board, to any college or university served by an Army ROTC program.

U.S. Army Reserve Command Sgt. Major Andrew Lombardo shared with Fox News Digital that the scholarships are an “awesome opportunity to recognize the talents” of Americans.

“To be able to pay for their university experience and, at the end of it, they get to commission as an officer — so they get to pursue dual pursuits — I think that’s pretty cool,” he said.

“What a great way to spend a Sunday.” 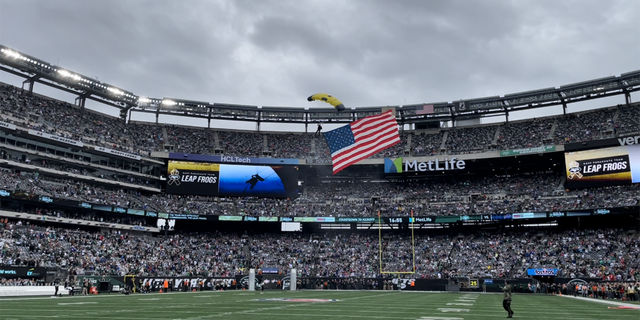 During the game, a 50/50 raffle brought in more than $100,000, which will benefit the Tunnel to Towers Foundation — which in turn helps America’s heroes.

“Thank you so much to you and to your families,” Stitt said. “We stand on your shoulders with what we’re able to do today.”

“And we will continue to defend and uphold your legacy every day.” 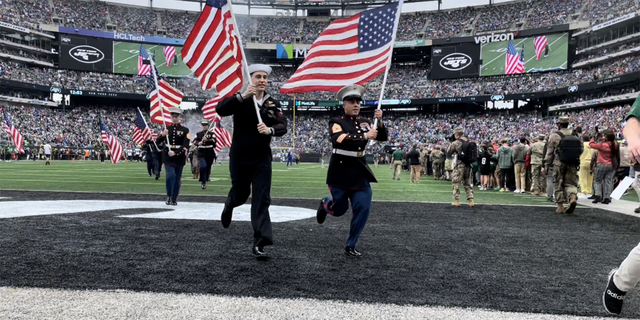 As a veteran himself, Lombardo gave a shout-out to his “idols” and shared his appreciation for their sacrifice.

For those interested in learning more about the Minuteman Scholarship, Lombardo encouraged students to contact any professor at a college or university with an ROTC program.