us-regions authorities nabbed two suspects on Tuesday charged in connection to the 2019 crime of a county crime‘s 19-year-old son in a Charlotte grocery store parking lot.

Both men are charged for their alleged involvement in the November 2019 murder of Nathaniel Isenhour. He was the son of Cabarrus County Deputy Sonny Isenhour, the Cabarrus County Sheriff’s Office said in an update Tuesday, sharing Charlotte police’s announcement about the arrests.

Police previously described the victim as a “college student and beloved student-athlete in the Charlotte-Metro area.”

Authorities did not provide additional information regarding a potential motive. Mecklenburg County jail records show that Partlow is also facing a charge of robbery with a dangerous weapon. Pyle was also charged with possession and conspiring to sell and deliver marijuana.

The elder Isenhour also announced on his own Facebook page the “good news” about the arrests made in his son’s murder case.

Investigators believe 19-year-old Isenhour was inside of a vehicle in the Harris Teeter parking lot located at 8640 University City Blvd. when he came under gunfire just before 10 p.m. on Nov. 25, 2019. University City Division officers who responded to a shots fired call found evidence of the shooting when they arrived on scene, but no victims or potential suspects, police said.

Police located Isenhour at Atrium Health University City Hospital suffering from a life-threatening gunshot wound. He was transferred to Atrium Health’s Carolinas Medical Center, where he was pronounced dead by medical staff the next morning, police said.

After his son’s death, Deputy Isenhour pleaded for anyone with information to come forward, WBTV reported.

“My son Nate was murdered in Charlotte. He was only 19 years old,” Sonny Isenhour said. “Before Nate passed, he became involved with some questionable individuals and that’s what led us to where we are today.” 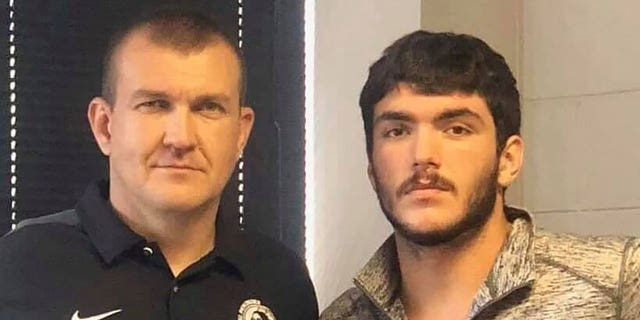 “Not knowing is absolute torture. Please, I’m begging – somebody say something,” he said, before addressing the shooter directly. “You need to get right with yourself because you will face justice in this world or the next. It will come to you. Get right with God.”

The victim’s mother, Sherri Walker, worked as an emergency room nurse, but she told WBTV at the time she never expected something like what she sees on the job to happen to her own son.

“I have held mothers whenever I couldn’t save their child,” she said following Isenhour’s death. “Never did I think I would be on this end of things.”

Homicide detectives identified Partlow and Pyle as suspects throughout the course of their investigation. In late 2020, a reward of up to $25,000 was offered for information. Police on Jan. 15, 2020, had released surveillance footage from a nearby gas station following the 2019 shooting. It showed a car peel out of the parking lot with its rear tail light out and visible damage to its front-right quarter panel.

Even after the arrests Tuesday, the case remains active and ongoing, police said. Anyone with information about this incident is asked to call 704-432-TIPS and speak directly to a Homicide Unit detective. Detective C. Sinnott is the lead detective assigned to this case. The public can also leave information anonymously with Crime Stoppers at 704-334-1600 or http://charlottecrimestoppers.com.