Investigators are searching for the unidentified male suspect caught on video attacking a 22-year-old male on a northbound A train near the 190th Street subway station just before 2:30 p.m. on March 19, police said.

The suspect sat across from the victim and was heard saying, “I wish I had my pepper spray” before spitting at the victim, according to authorities. 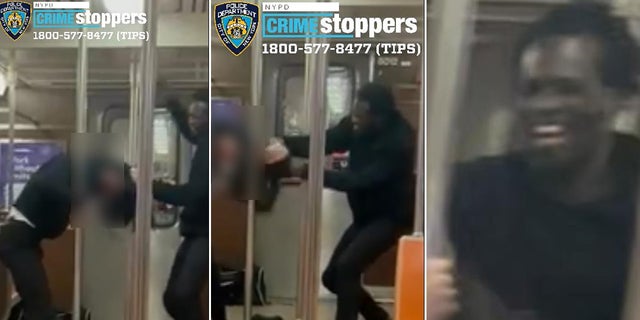 Police are searching for an unidentified man seen on video assaulting another man aboard a subway train earlier this month.
(NYPD Crime Stoppers)

The unknown man again stated, “I have to start carrying my pepper spray,” before spitting at the victim a second time, which caused the victim to stand up, police said.

The suspect then charged at the victim and grabbed him by the hair before repeatedly punching him in the face and head. He allegedly ripped hair from the victim’s head and said, “I’m sick of all you f-gs.”

The victim lost hair and sustained lacerations to the head, police said. First responders took him to Columbia Presbyterian Hospital for treatment.

The investigation remains ongoing by the Hate Crime Task Force. Authorities asked anyone with information about the incident to call the NYPD’s Crime Stoppers Hotline at 1-800-577-TIPS (8477).

There were 35 transit crimes reported from March 21 through March 27, compared to 29 reported during the same period last year – a 20.7% jump, according to public NYPD data.

As of Sunday, 540 transit crimes have been reported citywide so far this year – a 70.3% increase compared to the 317 transit crimes reported during the same period in 2021, police statistics show.

Hate crimes have also risen 59.2% year-to-date, with police data showing that 121 have been reported so far this year compared to 76 during the same period last year.