The New York City Department of Education placed dozens of school employees on unpaid leave for allegedly faking their proof of a COVID-19 vaccination, according to the New York Post.

The city notified impacted employees on Wednesday that the unpaid leave would begin Monday. Former NYC Mayor Bill de Blasio imposed a vaccine mandate on the city’s education workers in 2021.

“Fraudulent vaccination cards are not only illegal, they also undermine the best line of protection our schools have against COVID-19 — universal adult vaccination,” a city DOE spokesman told the Post.

“We immediately moved to put these employees — fewer than 100 — on leave without pay,” he added. 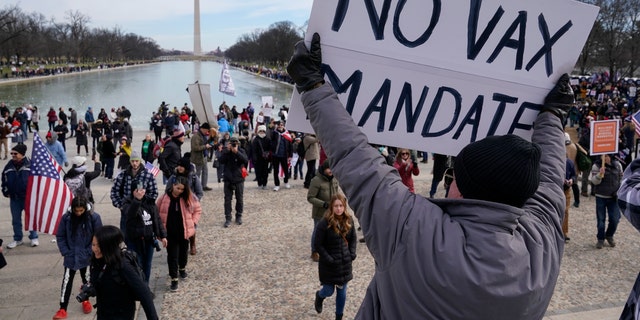 Protesters gather for a rally against COVID-19 vaccine mandates in front of the Lincoln Memorial in Washington, on Jan. 23, 2022. A federal appeals court on Thursday, April 7, 2022, has upheld President Joe Biden’s requirement that all federal employees be vaccinated against COVID-19.(AP Photo/Patrick Semansky, File)
(AP Photo/Patrick Semansky, File)

NYC reportedly took the action after receiving a report from law enforcement that the employees had provided fraudulent vaccination cards or had otherwise faked proof of vaccination.

AS VACCINE DEADLINE LOOMS, FIREFIGHTERS RALLY AGAINST NYC MANDATES THAT COULD MEAN TERMINATION FOR MANY

The United Federation of Teachers (UFT) criticized the move, saying that the city had not done enough to verify that the employees had in fact faked their vaccine status. The teachers union says a number of its members were wrongly identified as fraudsters.

“It is wholly improper for the D.O.E. to unilaterally remove U.F.T. members from the payroll based on mere conjecture that vaccination documentation is fraudulent,” UFT lawyer Beth Norton told the New York Times.

The city has not announced how long the unpaid leave will last. Law enforcement and the city’s Special Commissioner of Investigation (SCI) are continuing to investigate the allegations.